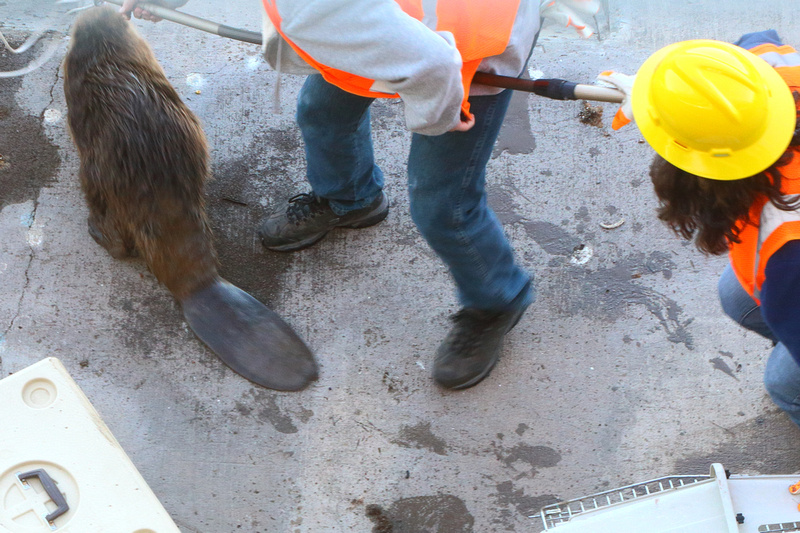 Resisting Arrest With A Blunt Weapon

In this second edition video, which displayed in the 6PM hour, I lost the verbal credits, but several more images were used to better tell the story. Here is the link to the full report, which includes the updated video, a gallery of all the same images above, as well as the text reporting, where I am credited for the photos.
If you rather not travel away to see all that, I will repeat the text here, as well as embed the actual video and photo gallery:
PHOENIX (KSAZ) -

A beaver spotted swimming in Tempe Town Lake has been rescued. Photos provided by John Morey this morning show Arizona Game and Fish workers using a net to scoop the beaver out of the water.

Usually beavers will put up a fight, but the fact he was captured so easily is not a good sign for its health.

The beaver was loaded into a crate and taken to the Southwest Wildlife Rehabilitation Center.

Video provided by Game and Fish shows the Beaver lethargic and officials say he was dehydrated.

"Just because he wasn't feel well, so I didn't want to do anything that would compromise his breathing or heart rate," said a veterinarian at the center.

They checked out his heart rate and performed several tests on him to try and figure out if there is something wrong with the beaver.

Beavers are native to the Salt River, but they're not supposed to be in Tempe Town Lake, and definitely not in the construction area of the new dam.

They Plan to nurse the beaver back to health before releasing it back into the wild.

Lastly, for the sake of different reporting, here is another take, which is fully focused on the vetrinarian and the two people who rescued him.  Subsequent reports indicate that the beaver is doing very well, and has turned on a lot of charm to really become a local celebrity of sorts...I have to admit he is adorable.  Plans are that in about a month, they will release him back into the wild, somewhere up in the Verde Valley River system in central Arizona.  I'm not sure how good my luck is, but if I can manage to be a part of that, I will report back with a blog update.