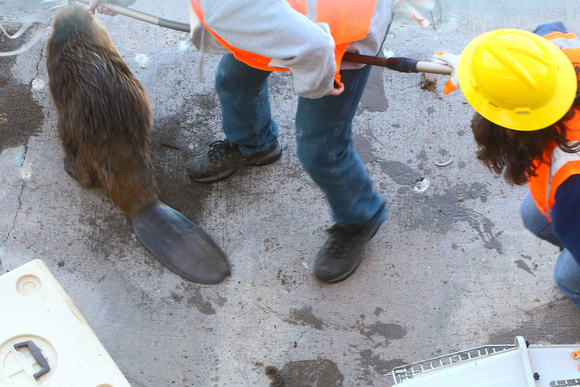 Resisting Arrest With A Blunt Weapon

Last evening the airwaves came alive with tales about a beaver-at-large in the Tempe Town Lake area, in the vicinity of the Western shores along the lake’s edge. It seemed suspiciously close to the very large and active construction project of the new dam for the lake, and raised concerns of local passers-by who happened to catch a glimpse of him hanging out in a watery concrete drainage area, raised up and overlooking the entire construction scene. Regardless if the beaver was hired by the City of Tempe to oversee the project, since as we all know what beavers like to build, or if he has been the custodian of the soon to be antiquated dam, it makes little difference – This is currently a dangerous place for a beaver, at least without a construction helmet. I retired for the evening, while watching the latest live update from the Fox 10 local news channel, with promises of more updates to come the following morning, once Arizona Game and Fish officials could assess the situation in daylight, and safely relocate him if needed. As I turned in, I amused myself with the duel thoughts of wondering if this really warranted so much attention in the local world of news, yet I was also oddly interested in the little fella’s outcome.

When I awoke in the morning, the airwaves repeated the same stories every half hour, with no additional information, so I decided to dress for work in a little more haste than usual, and see if I could stop by the area on my way to work that day for a glimpse. The way the reporting was going here, I half expected to arrive to a carnival-like atmosphere of onlookers, well-wishers, and officials, similar to what one might find if a child fell into a well and was trapped. However after parking on the South side by the Tempe Center Center For The Arts, and approaching the footbridge that crossed the area in question, I arrived to a peaceful setting with no-one in sight who might be interested in such things. It was just me here, and it was a half hour after a beautiful sunrise. The sunlight was dappled and diffused through low-lying clouds on the horizon, and all I could find were some pelicans and other waterfowl fishing for their breakfast – meanwhile overhead, an adult bald eagle soared circles high above in sky, also looking for breakfast. I walked more than half way across to the North side, looking for that busy beaver, but started to resign myself to the idea that he had either left on his own, or else was already collected by officials…but I was wrong.

There he was! Much closer to the Northern edge of the lake that I had assumed. And simultaneously next to him, above on the concrete edge of the water retention area, but below my position on the footbridge directly above, were three people in bright safety vests, heavy gloves, and construction helmets, readied with a giant net and multiple animal crates. They were literally just starting to corner the suspect when I arrived, and I was the only observer of the event. Worried about any sort of “police brutality” and overuse of force, which would trigger a riot and bring the community to its knees, I immediately poised myself and started documenting the capture. At first he seemed easily captured in the man’s initial attempt with the net, but heavy enough that it took some effort to drag him up the embankment to the waiting animal crate. They should have rehearsed this maybe once, for in the awkwardness of the attempt to transfer the “Beav” from the net to crate, he easily walked right out of the net and away from the crate-door. The man with the net attempted to stop him quickly, but with odd agility our suspect made a grand escape back into the water. Undaunted, they repeated the process, learned from their mistake, and the beaver was safely apprehended for questioning - and probable deportation.

As a matter of information, beyond my tongue-in-cheek reporting above, I’d like to clear up some things. In my discussion with other residents in the area, wondering what caught my photographic interest so much, I came to find out that there is nothing really new in this matter. Apparently this beaver has lived here for quite awhile, and previously occupied a little drainage pond of sorts, that naturally occurred on the dry side of the dam in the Salt River bottom, but who now is displaced by our ongoing improvements with the current new dam project underway. While he did not put a tremendous fight, he looked reasonably healthy and was in no immediate threat – save for his extreme closeness to a dangerous area – but clearly he has learned to live with it for awhile. Regardless of eminent domain or not, he would eventually have to move, and I certainly wish him well in his hopeful relocation.

Regarding wildlife in Tempe, this is nothing new. The Salt River drainage is an often used corridor, by both bird and mammals, and nearly every Winter I have multiple encounters – be it eagles, osprey, or riparian waterfowl – or coyotes, bobcats, and now beavers. At the Eastern edge of the lake, near the Tempe Marketplace and the Loop 101 & 202 stack, exists an amazing riparian area that most of us are not aware of. It is not a designated area, nor is it protected, other than being off-limits to the general public, due to being a public infrastructure drainage area, but it serves as a wonderful oasis for many of the wild bunch that live and migrate through the area.
© 2021 John Morey Photography
Powered by ZENFOLIO User Agreement
Cancel
Continue