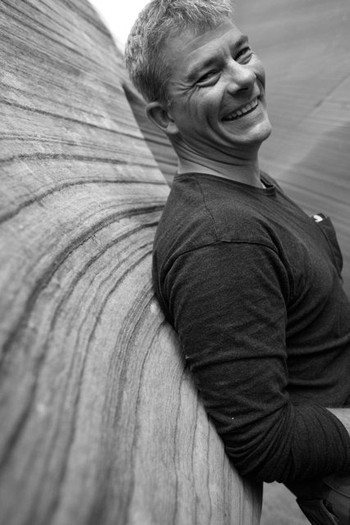 John Morey has made Arizona his home since 1980. In 2016 he made a move to Hawaii on the island of Maui for three years to alter the color palette he worked with, and has now returned to his Grand Canyon State homeland to settle in the historic downtown area of the city of Flagstaff, with an evolved spirit for the beauty of the world and his place in it. Despite the urban address, he feels truly at home when he is “roughing-it” in the Arizona outback and beyond, moving through the wild back-country capturing moments both epic and small, showing how little difference there is between the two – and that is the environment where he finds his inspiration. The inspiration occurs in two ways, both of which allow him to continually evolve and learn about himself in the process – as a man seeking adventure and enlightened self-fulfillment in a fast-paced and ever-changing world; and as an artist sharing these personal moments to the world as a provoking source of beauty and power to inspire others to act upon. Says Morey:

“As an adventurer, of course the sheer beauty of the natural scenes and moments I witness are without doubt the best rewards I receive. In those moments, being present to the here-and-now of myself, and my world, humbly inspires me to be a better man to others, a better steward of my planet, and above all a better drop of nothing in the vastness of everything. As an artist, inspiration also comes from executing and producing an uncommon view of an iconic scene, framed with the mental and physical efforts required to do so, and matted with the inherent life lessons I always learn about myself in the process. When I can share the full breath of all that beauty with the world, both internally and externally, I feel as though I have found my place in the cosmos.” ~ John Morey

According to John, while there are many current artists and others in the world that he draws knowledge and inspiration from, he also points out that he is often inspired by those historical people who have come before him in this life and played a part in the coloring of the palette from which he creates; a short list of such people include Ansel Adams, John Muir, and Theodore Roosevelt. He loves to photograph anything nature-related, especially landscapes and wildlife, yet he also finds that capturing natural human moments in nature qualifies as favorite subject material too. While John considers all of the great outdoors to be his canvas, he creates most of his works within the remote back-country of our nation’s national parks, monuments, forests, and designated wilderness areas.

Although John Morey is relatively new to the field of contemporary photographic fine-arts, embracing it seriously since 2008, he is no stranger to photography and handling a camera – It just took a bit of time to realize. As a child, John was given his first camera in 1977, which he used often but never creatively mastered, leaving him feeling fortunate to capture a few decent shots out of a roll of 36 exposures. His interest grew over his young adult years, marked by periods where he studied composition theory and performed dark-room assignments, yet he never considered it as more than fun, or as any sort of artistic future to pursue; most often setting the camera aside for other endeavors. As an aging adult having spent much of his career as a software analyst in a predominately left-brained industry, John found he craved a right-brained creative outlet to express himself, yet he quickly realized he had little skill with most traditional arts. However, after a transformational six-week adventure through the African continent in 2007, armed with his first digital camera and the ability to get immediate feedback from the device, John finally embraced that he always had a natural gift for composing images. It was when he returned from this adventure that he decided to pursue nature photography in earnest, and do what was needed to consistently produce quality and provoking imagery of landscapes and wildlife. Morey relates that since then:

“My photography has evolved into more than just a renewal activity to exercise my right brain. It is a transformational window into the experience of my soul, as I express from my mind’s eye the moments of beauty that constantly surround us, but often go unnoticed in such a fast-paced world. When I am in those moments, I become more related to the world around me, and thus my experience of life and my place in it is enriched. Photography has become the perfect expression for me, as it satisfies my creative side while simultaneously honoring the process-driven side that I was a slave to. It is the artistic channel that allows me to continue to learn about myself, gives me access to power, and allows me to share my soul with the world in the hopes of positively affecting it.” ~ John Morey

Morey not only shares his soul with the world from behind the lens, but also from behind the proverbial pen, often spending more creative time and energy producing an accompanying narrative for his images, than the time spent to visualize and execute the capturing and editing of the images themselves.  While he does believe in the old adage “A picture is worth a thousand words” and wants each viewer’s experience to be a personal and unique response based on their own inner-self, he feels just as compelled to help guide the viewer towards that personal end:

“When I write about what is going on for me in these moments, attempting to draw simple lessons from nature and seeing how they measure against my own evolving life, if I don’t make myself vulnerable and share what is occurring for me, then I am robbing the world of knowing what is possible for themselves by getting out into the beauty and sometimes the harshness of nature. This is where I learn about myself in ways hardly available to me in the fast world. I also know that many will never get out to, or see, or experience these images and moments for themselves, and so for those people, I feel it is extra important to lead the viewer to a deeper level of thought, and help give their own thoughtful, mindful, and vulnerable sides permission to stir.  For me, that is where the real juice is.” ~ John Morey

John’s published works have been profiled in nationwide newspapers many times, along with magazines, books, international award-winning travel blogs, and various digital media - including USA Today, The Arizona Republic, AZCentral, Arizona Highways Magazine, multiple National Parks books like “Death Valley: Hottest Place on Earth” and "The Mighty Colorado River: From the Glaciers to the Gulf", along with other fun and innovative books like "Boots and Burgers: An Arizona Handbook for Hungry Hikers". His work was even selected to be used in print, video, and display in various national outlets celebrating the 50th anniversary of The Wilderness Act, passed by congress in 1964 – including promotion at the Smithsonian Museum of Natural History. John views his participation in all of these publications and outlets as his own way of sending love letters to Arizona.

In his craft, John Morey caters to current arbiters of taste and future collectors wishing to display stylish, natural, contemporary fine-art imagery in their everyday home and/or business environments. His original art prints are produced on multiple mediums, from various fine-art papers and canvases, to Chromaluxe brushed aluminum metal prints, up to the most magnificent display possible using Lumachrome technology with high-quality acrylic prints. These products are offered on a variety of levels, from print-on-demand digitally-signed prints, up to his original signed and numbered, stylish, limited-edition prints – included “artist’s proofs” and “first printings”. Most of John’s collection of work is also available for licensing, and if you don’t want to buy, he has also created the ability to lease his art prints. Lastly, for those aspiring artists wishing to emulate John’s skills, ability, and photographic opportunities, he also works with people one-on-one teaching photography concepts and technique, as well as leading private photography workshops and excursions.