Uncertainty And The Icy Grip Of Fear - Yellowstone National Park

Uncertainty And The Icy Grip Of Fear - Yellowstone National Park

After spending all of my Christmas and New Year's holidays traveling around and through Yellowstone National Park, here is the first image I've chosen to publish.  The beauty I experienced and the sadness I felt in this particular scene left quite the impression on me and is why I have chosen it first.  What is especially interesting is that this image exemplifies what I call "Indirect predation", and as with most of my image posts which honor the concept of letting Nature be your teacher, this one also offers some life lessons for humanity.  I hope you enjoy the harsh beauty and the feelings of the moment as I attempt to convey them in words that properly tell the full story...

Up in the late December snow-covered hills, a half of a mile away, the wolf-pack’s howl could ever so faintly be heard while standing perfectly still – gently laced between the rhythm of my own heart beats and frosted breaths. Their soulful report riding upon the sub-zero winds ebbed and flowed upon the strength and current of the icy air each moment by moment; and with that muted howl upon the changing winds, the direction of the danger was difficult to determine. Occasionally and ever so slowly, as if each movement was slowed by building ice and fear in its veins, the bull elk with numbed legs and mind turned his head away from looking directly at me to gaze left and then gaze, right looking for the wolves, only to settle back on me. Actually, he was never looking at me, but instead past me or through me, for in his paling eyes and posture I could see that this was a sad and distant gaze, reserved for those who know they are marked for death. His answers from looking about were nullified, for while he was assured that the wolves were not close enough to see and he was still safe for the moment, the uncertainty of their direction kept him fearfully frozen in position – hour after hour, until the frigid end. 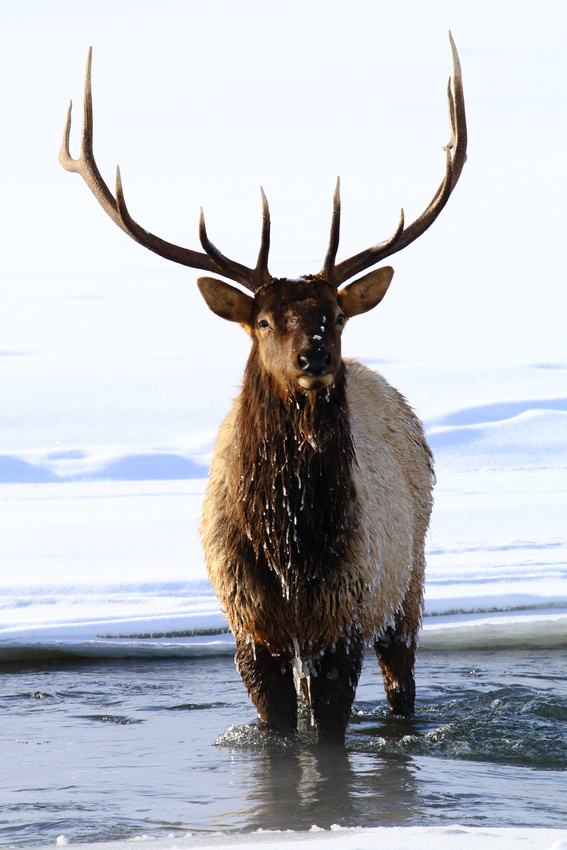 The Icy Grip Of Fear

Likely the wolf-pack had engaged the elk during the previous night, or in the early morning, and it likely quickly ended when the elk temporarily escaped by moving into the center of the river, where wolves prefer not to go if they don’t have to. Perhaps the wolves tried in earnest and failed, or perhaps with just cunning thought they were patiently setting the stage for an easy meal later. While no physical damage was apparent on the bull’s body, the psychological damage of paralyzing fear and anxiety was already done, and it was just a matter of time before the body would give way to an icy death caused from hypothermia. While I could not stay on location all day to the bitter and frigid end of this noble beast’s life, I suspect he finally died during the night where he stood, and it was likely that the wolf-pack didn’t even have to engage him again. Days later, I met some people who had been to this same area the day after I had, and they reported that the elk had indeed made for a fine meal of the wolves of the Lamar Valley, Yellowstone National Park.

Regarding the events leading up to this moment, it can feel like such a cruel joke of sorts that Nature plays, but yet it is truly born in keeping the healthy cycle and balance of things. This elk’s pending and lurking death is most certainly the result of his choice-less and instinctual behaviors, just a short month or so prior. In November, this bull was in top shape in the prime of his life and heavily engaged in the annual rut. The rut is an instinctual breeding ritual each Autumn when bulls gather cows and calves into small groups called harems, and then aggressively guard their harems from other bulls – the idea being only the most strong and best bulls earn mating rights to pass on their genes in this eternal game we know as “Survival of the Fittest”. When the rut ends, the harems disband and both sexes continue to eat as much as they can in preparation for the coming winter; a time of sparse food. However during this time of rutting activity and constant guarding and defending of the harem, the bulls often expend so much energy and commitment to those goals that they often fail to keep their own nutrition at a high level – loosing roughly 100 pounds in the physical toll of the process – and often resulting in a lack of time and preparation for surviving all the dangers associated with the coming winter. These are situations that the wolves look for, singling out weak bulls, and it is an age-old dance in the primeval ballet of life and death. 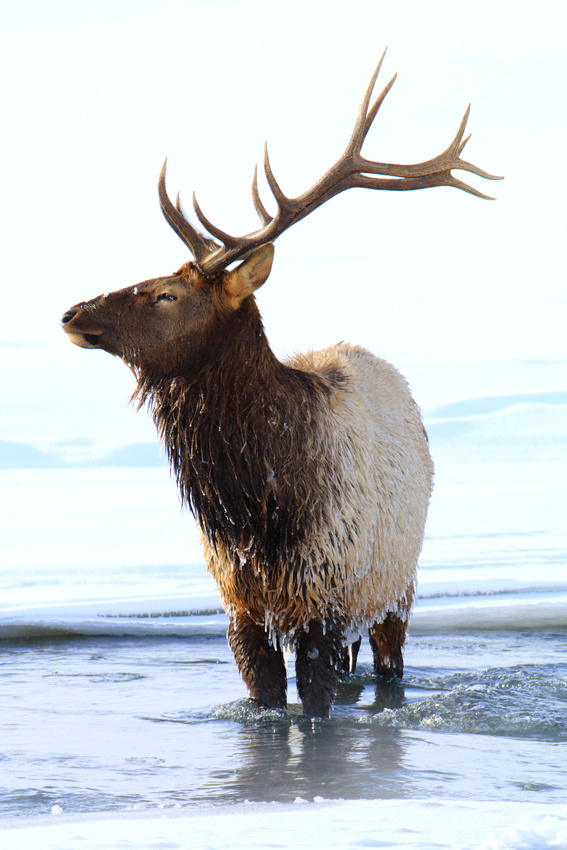 From a subjective and human emotional point of view, I will say this: While photographing this moment of frozen and numbed fear, I was entranced with just how beautiful and sad it was to me. All things become more beautiful as they are near to passing from us, and this was going to be the closing up of a beautiful life. Yet in that beauty there was stark sadness. Emotions welled within me as I considered his failing majesty, while he slowly gazed back and forth with cold and paralyzing uncertainty – the heaviness of my heart punctuated by the growing ice-cycles clinging to his coat as the hours crept by. Still to this moment as I view this image, I am humbled by the harsh beauty of it all, and I am continually reminded of the power of fear and our human relationship to it. If only he would move out of the water and run as fast and far as he can, he might survive. I wanted him to move. I wanted him to face his fear. I wanted the great spirit between the elk and myself to show me it was possible to face your fear, not give up, and move through it with courage. I didn’t want him to give up, and that is perhaps when the tears finally formed and froze to my cheeks. While I believe fear is healthy, and an emotion that is indispensable for life-and-death survival, fear is stoked by uncertainty and worthless without courage and action. What is left to rely on when all else fails is courage – and if you still die in the process, then at least you really lived your last moments well, instead of wasting away in the grip of fear.

There are lessons here for those who carefully observe, and Nature is the supreme teacher. What fears do you currently have that stop you from taking action? What uncertainty in your life has you looking at the same options over and over again and persisting with inaction? How much are you living a dead-life because you are scared of something confronting you? If any of this rings true for you, consider that you have two choices. You can figuratively do what this elk has done, and stay frozen in fear and wasting the last moments of life due to uncertainty, or you can take a chance and move into and through your fear and perhaps live again. If you do the prior, you are guaranteed to still be where you are in the matter. If you do the later, for better or worse at least you tried, and lived the moments while doing so, regardless of the result – and isn’t that really what it is all about to be a human in this life?

“I must not fear. Fear is the mind-killer. Fear is the little-death that brings total obliteration. I will face my fear. I will permit it to pass over me and through me. And when it has gone past I will turn the inner eye to see its path. Where the fear has gone there will be nothing. Only I will remain.” ~ Frank Herbert, Dune

JEANNE STONE(non-registered)
Awesome John! Welcome to the world of blogging, and this is such a great shot and story! Love it!
Pat Nelson(non-registered)
Nicely written observation of the cycles of nature. As for the meaning of everything in life, we each make up our own story – whether collectively or individually. I think there is perfection in the natural course of events, so the way I tell this story and what I see in these images is the last stand of an animal who knows in the core of his being that the end is near and, rather than retreat and lie down or make a feeble attempt to flee, he chooses instead to stand tall in all his magnificence right up until the inevitable moment of surrender when he gives himself to the wolves and merges with their manifestation of the wild.
No comments posted.
Loading...
Topic Categories
CALL OF THE WILD - Educational Field Journal ANNOUNCEMENTS - Accomplishments Accolades & Awards THE ARTIST'S PALETTE - About John's Craft & Offerings LET NATURE BE YOUR TEACHER – Simple Lessons TALES FROM THE VAULT - Memorable Stories & Adventures DEEP THOUGHTS BY JACK MOUNTAIN - Original Writings PIC - PHOTOGRAPHER'S INCUBATION CENTER - Teachings & Recommendations
Recent Posts
Artist Biography About My Art - Artist Statement Why I Create Art - Artist Statement Publishing Announcement: "The Mighty Colorado River: From Glaciers to Gulf" Icelandic Horses – Just another remarkable thing that makes Iceland so famous and unique The Majesty Of Anna’s Love, Part 2 – The Feeding Of An Anna’s Hummingbird Nest The Treasures Of Vermilion Cliffs - Wild Gems Where Erosion & Character Reigns Supreme Weddings, Wilderness, and Wachy Ideas - A Unique Experience In The Wave Of Coyote Buttes ANNOUNCEMENT - Silent Art Auction To Benefit Down Syndrome Network Of Arizona The Majesty Of Anna's Love, Part 1 - The Discovery Of An Anna's Hummingbird Nest
Archive
January February March April May June July August September October November December
© 2022 John Morey Photography
Powered by ZENFOLIO User Agreement
Cancel
Continue