Happy 50th Anniversary Wilderness Act!  Such an honor to be counted amongst the top 100 out of over 5500 images submitted.  "Honorable Mention - People in Wilderness" 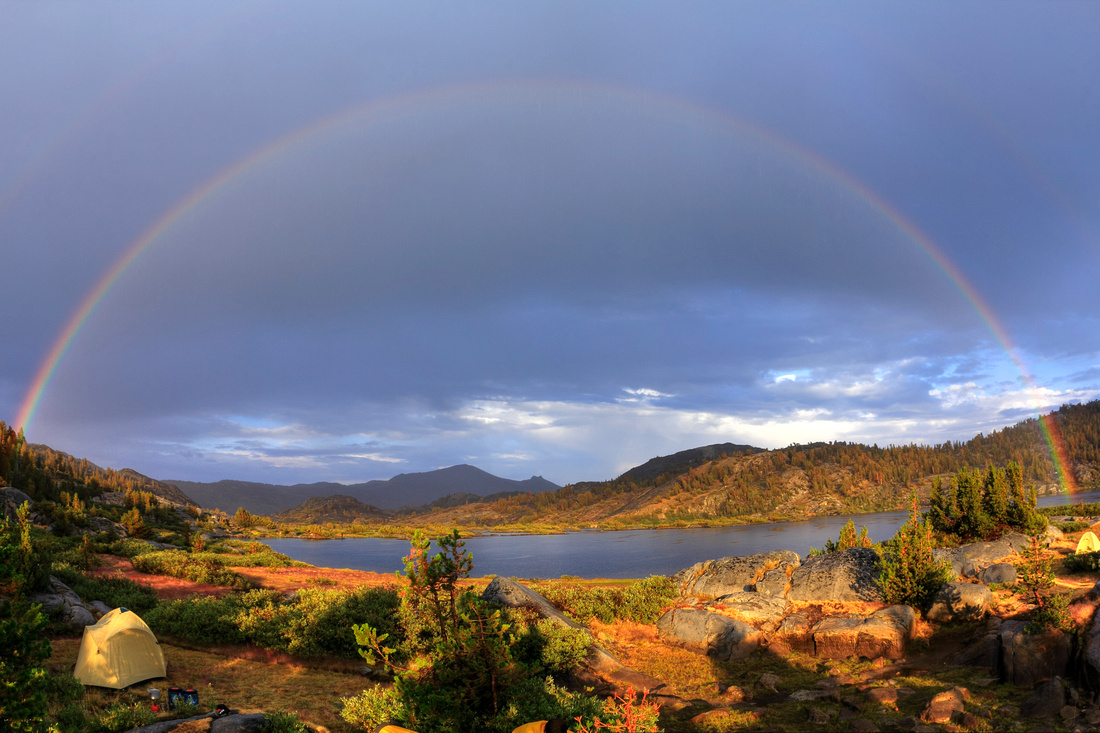 The Report Of Peace And Sunshine
"When thou dost shine, darkness looks white and fair,
Forms turn to music, clouds to smiles and air;
Rain gently spends his honey-drops, and pours
Balm on the cleft earth, milk on grass and flowers.
Bright pledge of peace and sunshine!" ~ Henry Vaughan
At the edge of Thousand Island Lake, near the base of Mount Banner, in the Ansel Adams Wilderness. Upon arrival and setup of my campsite, only a mere hour of sunshine and delight existed before the surrounding clouds in all directions converged overhead and then chose not to move. The lightning strikes, multiple hale falls, steady hard rains, and saturated clothing forced me into hiding and depression. The storm after 6 hours eventually abated in the early evening not allowing any opportunity to dry out.
The next morning the clouds and storm returned for a second 8 hour assault, forcing me into hiding and depression again. In these hours I considered many things about myself and what I was up to and if there would be any chance to redeem my goals on this adventure. Once or twice I ventured out into the fray to speak to the skies and request a truce, only to be forced into siege again and again. It seemed another day of my life would be squandered without reward.
It was in the moment of my deepest despair, just five minutes before final light of the second day, when my shelter turned ablaze in a bathing of light. I ventured out again to see what cruel joke was being played on me now, but in the distance down by the lake I could hear the faint report of one of my associates cry out "RAINBOWwwwww". I quickly turned to the East and upon seeing the magnificent beauty I could only exclaim in my loudest boom the same; "RAINBOWwww". As I hurried my camera gear, dressed only in long underwear, I could hear the same report echoing over and over again at different points around the lake by others who had been enduring the same hardships. In the last moments of light as I composed my art, this report of Sunshine's Pledge continued to echo. And as soon as I was complete in my craft, the sun finally fell surrendering to darkness. For 26 hours of suffering, this image was my reward -- and I was at peace.

Here is an embed of the "Wilderness Forever" Facebook page, where my image is included.

The Wilderness Act, a cornerstone of America’s conservation laws, marks its 50th anniversary September 3, 2014. The act established the National Wilderness Preservation System that represents America’s most wild and pristine federally protected lands. Today, these lands encompass 758 wilderness areas covering more than 109 million acres in 44 states and Puerto Rico. Together, they represent the largest, most highly protected body of wild lands in the country.

To celebrate this important anniversary, the Smithsonian’s National Museum of Natural History has opened the photography exhibition, “Wilderness Forever: 50 Years of Protecting America’s Wild Places,” which runs through summer 2015. Presented in collaboration with Nature’s Best Photography and Wilderness50, the exhibit features juried selections from over 5,000 entries across the country.

These award-winning images, captured by professional, student and amateur photographers, reveal America as you've never seen it before — wild, untouched and free. Located on the National Mall, the museum is open from 10 am to 5:30 pm, every day except for Christmas Day. The exhibition is located on the second floor of the museum.

September 2014 will mark 50 years since the passage of the Wilderness Act-one of America's most successful and enduring pieces of conservation legislation. To celebrate this milestone, Wilderness50, Nature's Best Photography, Esri, and the Smithsonian Institution will showcase an exhibition of juried photography highlighting the beauty, diversity, and longevity of America's wilderness. The exhibition, titled "Wilderness Forever: 50 Years of Protecting America's Wild Places," opened September 3, 2014 at the Smithsonian's National Museum of Natural History in Washington, D.C. and will run until summer 2015.

Winning photographs, announced at the beginning of March 2014, were selected from over 5000 public entries submitted nationwide. The over 50images are displayed as large-format prints in the nation's most-visited museum, which welcomes more than 8 million visitors each year.

In addition to the photographs, the exhibition includes interactive story maps that are also publicly available online:

The Wilderness act of 1964, signed by President Lyndon B. Johnson was a great thing for sure, and I give thanks for it all the time.  Here is some additional information about the Wilderness Act:

The Wilderness Act of 1964 created the National Wilderness Preservation System, a nationwide system of federally protected lands known as wilderness areas. Today there are 758 wilderness areas across 44 states and Puerto Rico. Together, they represent over 109 million acres, or about 5 percent of all U.S. land. To learn more about where these Wilderness areas are, check out this interactive map and look for my image in the Ansel Adams Wilderness Area of California.

There are many types of public lands that fall along a spectrum of management and protection. They include national forests, national monuments, national parks, national preserves, national recreation areas, wilderness areas, as well as their state, local and tribal equivalents.

The stewardship of wilderness areas is entrusted to four different federal land management agencies. They are the National Park Service, Forest Service, Fish and Wildlife Service, and Bureau of Land Management. While their monitoring and care approaches may vary, their mission is the same; to care for and protect wilderness areas and its natural inhabitants for the benefit and enjoyment of current and future generations of Americans.