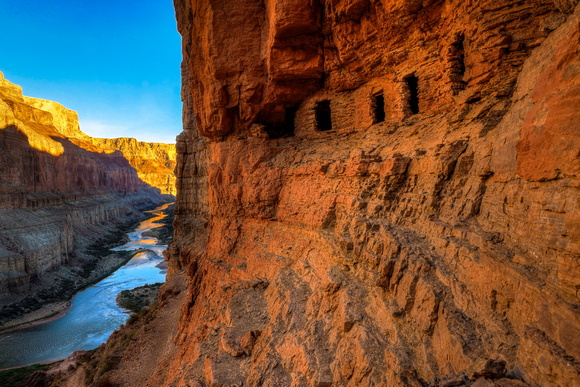 Life Awaits Man As The Sea Awaits The River

"All rivers, even the most dazzling, those that catch the sun in their course,
all rivers go down to the ocean and drown.
And life awaits man as the sea awaits the river." ~ Simone Schwarz-Bart

Despite the geologic mysteries surrounding its creation (or continued existence), archaeological findings show that the alluvial fan delta below these ruins clearly provided a habitat for historic inhabitants. In 1960, archaeologist Douglas W. Schwartz investigated the area, including the granaries nestled in the cliffs above the river. He found corncobs, a pumpkin shell, and pumpkin seeds inside the granaries. The people who inhabited the delta harvested these and other crops between 1050 and 1150 A.D. Schwartz gathered other evidence of habitation in the area including other ruins, a petroglyph site and thirty-four pueblo house structures, leading him to conclude as many as 900 people may have lived in the area at that time!
© 2021 John Morey Photography
Powered by ZENFOLIO User Agreement
Cancel
Continue