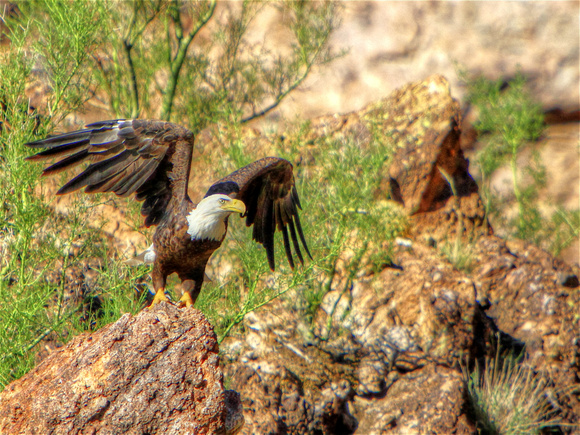 This Bald Eagle was photographed on the cliff-banks of Canyon Lake, Arizona. 10 years ago I only saw one Eagle here in Arizona my whole life. In the past 3 years I've seen on average of 10 each year, with the majority of them being either in the Phoenix area, or within 50 miles of it. It is a great success story.

Very little information existed on the species in Arizona when bald eagles were first listed as endangered. Only 11 breeding pairs were known. Scientists first believed the population in the southwestern United States was historically small and on the fringe of its suitable habitat. Land and wildlife resource managers in Arizona began an intensive research, monitoring, and management program after the bald eagle was listed that successfully recovered the species to more than 50 breeding areas statewide. Although the bald eagle has been removed from the Endangered Species Act nationally, the population in Arizona still requires management to maintain its current size. The Arizona Game and Fish Department and the Southwestern Bald Eagle Management Committee have developed a cooperative management plan to maintain and increase the bald eagle population in Arizona.
© 2022 John Morey Photography
Powered by ZENFOLIO User Agreement
Cancel
Continue