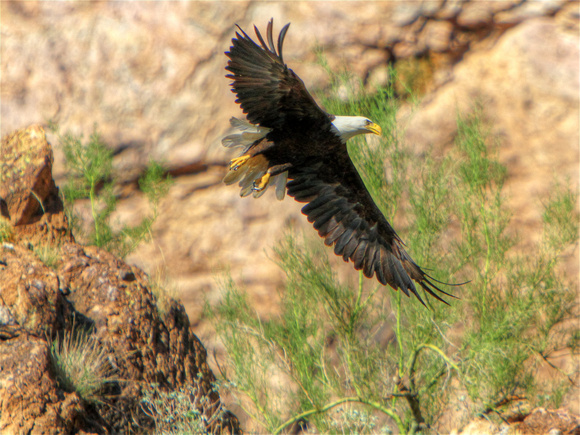 I photographed this Bald Eagle at Canyon Lake, Arizona a few weeks ago. Every time I have visited this lake over the past 3 years, it is pretty much guaranteed that I am going to site some eagles. While this particular one is not mated or nested, there is a strong chance he would not be alive if it were not for the past efforts of volunteers to help, such as The Arizona Bald Eagle Nest Watch Program.

The Arizona Bald Eagle Nest Watch Program is the only program of its kind in the United States. Since its modest beginning in 1978, the program has contributed significantly to the recovery, maintenance and growth of this unique population of desert nesting bald eagles. The Nest Watch Program has provided valuable data on nesting and foraging activities, habitat use and food requirements.

Throughout the years, Nest Watchers have also rendered emergency assistance to birds in distress. For example, in 1984 Nest Watchers stopped a bulldozer from toppling a tree with young in the nest. Also, that year, Nest Watchers plucked young chicks from a nest that was in the path of floodwaters. These chicks were placed in the empty nest of another pair of eagles and later fledged successfully. At another site some eaglets had fallen from their nests and the Nest Watchers put them back into the nest. The nine rescued eaglets represented 60% of the Arizona's eagle production that year. The Nest Watch Program, proves that there is no substitute for living with bald eagles to learn how best to protect them!
© 2022 John Morey Photography
Powered by ZENFOLIO User Agreement
Cancel
Continue