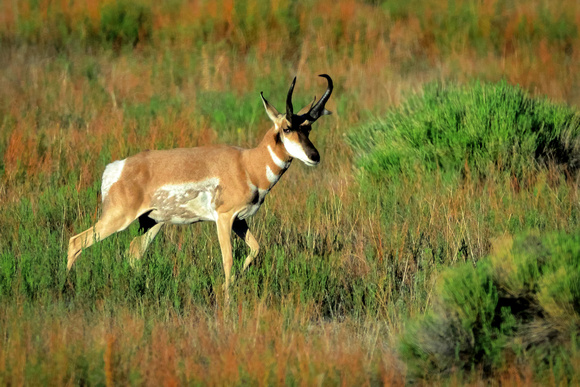 In The Pronghorn Morn

As a resident of Flagstaff, there is an abundance of nearby local outdoor treasures that I call my backyard, places I can rush to in half an hour or so to catch a scene, or just to park and chill and think about life. What's great is that I can do both at the same time and usually when I am deep down a hole somewhere thinking of something else and not present to my environment, the environment reminds me to be here and now. I am thankful.

Over just outside the entrance to Sunset Crater National Monument is such a place, called 'Bonito Park'. In any given solitary moment waiting for life to go by, I am usually witness to something while I sit around - little miracles of foraging life, common or otherwise - Pronghorns playing, hawks predating field mice, western blue birds scurrying about supporting their nests in the nearby pines.


The pronghorn (Antilocapra americana) is a species of artiodactyl (even-toed, hoofed) mammal indigenous to interior western and central North America. Though not an antelope, it is often known colloquially in North America as the American antelope, prong buck, pronghorn antelope, prairie antelope, or simply antelope because it closely resembles the true antelopes of the Old World and fills a similar ecological niche due to parallel evolution. It is the only surviving member of the family Antilocapridae.

The pronghorn is the fastest land mammal in the Western Hemisphere, being built for maximum predator evasion through running. The top speed is dependent upon the length of time over which it is measured. It can run 35 mph for 4 mi, 42 mph for 1 mi , and 55 mph for 0.5 mi. While it is often cited as the second-fastest land animal, second only to the African cheetah, it can sustain high speeds longer than cheetahs.

So what's the deal that this animal needs to be this fast, this is North American, not Africa. Well, it would seem that evolution has allowed this last animal of its scientific family to stand the test and outlast the predators for which the pronghorn required its speed. University of Idaho zoologist John Byers has suggested the pronghorn evolved its running ability to escape from now-extinct predators such as the American cheetah, since its speed greatly exceeds that of all existent North American predators. I wonder if over continued time they will loose that running speed and some of its other genetic features that make it built for speed.
© 2020 John Morey Photography
Powered by ZENFOLIO User Agreement
Cancel
Continue