Visitors 2
37 photos, 1 videos
The pronghorn (Antilocapra americana) is a species of artiodactyl (even-toed, hoofed) mammal indigenous to interior western and central North America. Though not an antelope, it is often known colloquially in North America as the American antelope, prong buck, pronghorn antelope, prairie antelope, or simply antelope because it closely resembles the true antelopes of the Old World and fills a similar ecological niche due to parallel evolution. It is the only surviving member of the family Antilocapridae.

The pronghorn is the fastest land mammal in the Western Hemisphere, being built for maximum predator evasion through running. The top speed is dependent upon the length of time over which it is measured. It can run 35 mph for 4 mi, 42 mph for 1 mi , and 55 mph for 0.5 mi. While it is often cited as the second-fastest land animal, second only to the African cheetah, it can sustain high speeds longer than cheetahs.

So what's the deal that this animal needs to be this fast, this is North American, not Africa. Well, it would seem that evolution has allowed this last animal of its scientific family to stand the test and outlast the predators for which the pronghorn required its speed. University of Idaho zoologist John Byers has suggested the pronghorn evolved its running ability to escape from now-extinct predators such as the American cheetah, since its speed greatly exceeds that of all existent North American predators. I wonder if over continued time they will loose that running speed and some of its other genetic features that make it built for speed.

Although built for speed, they are not for jumping. Since their ranges are sometimes affected by sheep ranchers' fences, they can be seen going under fences, sometimes at high speed. For this reason, the Arizona Antelope Foundation and others are in the process of removing the bottom barbed wire from the fences, and/or installing a barbless bottom wire. I can personally vouch for this, when last month I saw a big buck in House Rock Valley in the early morning. He decided as I drove near that it was time to depart, and it was a pretty decent gate. Looking at his path I could see the barbed wire ranching fence and got excited. I quickly stopped, reached for the camera and had time to line up and focus the shot as I tracked him about to reach the fence, thinking "I'm gonna get one of these suckers in mid-air", only to me amazed/dismayed that he did not break his gate while he tucked his body and those big antlers under the bottom wire of the fence, then stopped and turned to watch me from the other side of the fence, like "How'd you like that?" 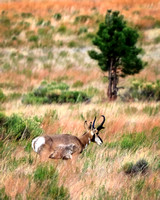 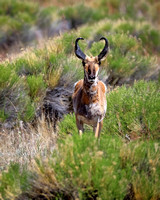 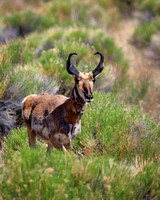 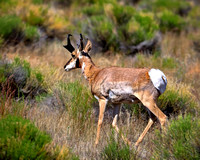 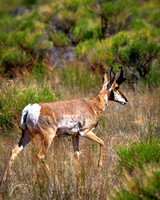