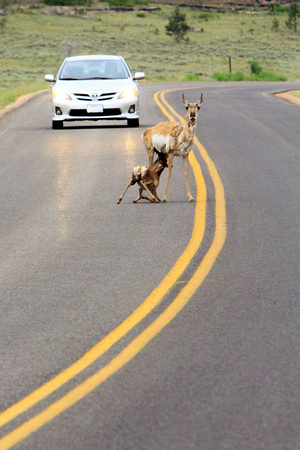 Pronghorn In The Headlights

Early travelers to America's West told of pronghorn herds dotting the plains as far as the eye could see, more numerous than bison. It was estimated that there were about 100 million pronghorn and 65 million bison, providing settlers with plenty of meat and hides. But as more people arrived in the West, the pronghorn's habitat and food supply was reduced. By 1920 there were only about 13,000 pronghorn left. Part of this major decline was due to hunting. Early settlers would tie handkerchiefs to poles and wave them in the air to attract curious pronghorn within gunshot range. Flagging is now illegal, and protection of habitat and restrictions on hunting have allowed the pronghorn to recover a bit. ~ Source: San Diego Zoo

While traveling through Bryce National Park, in Utah, I found this Pronghorn doe taking her fawn across the road, but only to be stopped by the fawn's insistence for a quick snack. Thankfully, both Doe and Fawn got out of the road very quickly...They are afterall the fastest land mammal in North America.
© 2020 John Morey Photography
Powered by ZENFOLIO User Agreement
Cancel
Continue