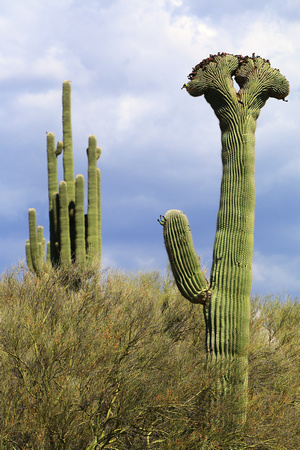 Whether you are a full-time resident or a seasonal visitor, it is hard not to admire the large and stunning Saguaro Cactus we are fortunate to have only in one place in the world – The Sonoran Desert. Once in awhile you will see a saguaro like this one, known either as a “crested” or “cristate” saguaro, which is a rare condition that scientists estimate happen with a frequency of 1:100000 – 250000. It is also somewhat unknown how or why this happens, but theories include lightning damage, frost damage, but in my belief just another example of nature’s ability to genetically mutate. But whatever the stimulus, the growth point of the stem has switched from a geometric point, to a line, which folds and undulates as the crest expands.

Photographed off of Highway 288, near the intersection with Cherry Creek Rd by Roosevelt Lake, Tonto National Forest. I’ve driven by this specimen for nearly 30 years, multiple times per year, but rarely do I stop to photograph it, due to poor lighting, background, or difficult perspective needed to show it off properly. I finally found these conditions to be reasonable, so I finally stopped to document it.
© 2022 John Morey Photography
Powered by ZENFOLIO User Agreement
Cancel
Continue