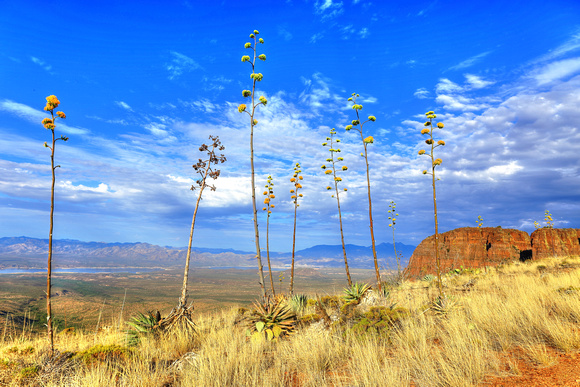 Agave Americana, or Century Plants, as they are commonly known, seemingly stand like sentries overlooking Roosevelt Lake with Four Peaks behind, as they take turns blossoming. Photographed from Parker Bluffs, of the Tonto National Forest, off of highway 288, Arizona.

Although it is called the century plant, it typically lives only 10 to 30 years. It has a spreading about 4 ft of gray-green leaves up to 2 ft long, each with a prickly margin and a heavy spike at the tip that can pierce to the bone. When it flowers, the spike has big yellow flowers and may reach up to 8 ft tall. Its common name derives from its nature of flowering only once at the end of its long life. The plant dies after flowering, but produces suckers or adventitious shoots from the base, which continue its growth.
© 2022 John Morey Photography
Powered by ZENFOLIO User Agreement
Cancel
Continue