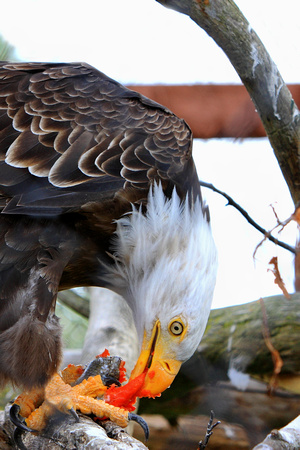 Living On Perpetual Occasions Of Hope

"The charm of fishing is that it is the pursuit of what is elusive but attainable, a perpetual series of occasions for hope." ~ John Buchan

The Bald Eagle is an opportunistic carnivore with the capacity to predate a great variety of prey. However throughout their range, fish comprise the majority of the eagle's diet. In Southeast Alaska where this Eagle was photographed, fish comprise approximately 66% of the year-around diet of Bald Eagles and 78% of the prey brought to the nest by the parents.

Southeast Alaskan eagles, such as this one pictured, largely predate Pink, Coho, and Sockeye salmons, but any spawning trout or salmon from summer throughout fall is a target. Even eagles living in relatively arid regions still typically rely primarily on fish as prey. In Sonora, Mexico and Arizona, 77% and over 73%, respectively, of prey remains at the nests were from fish, largely various catfish and Rainbow trout.
© 2021 John Morey Photography
Powered by ZENFOLIO User Agreement
Cancel
Continue