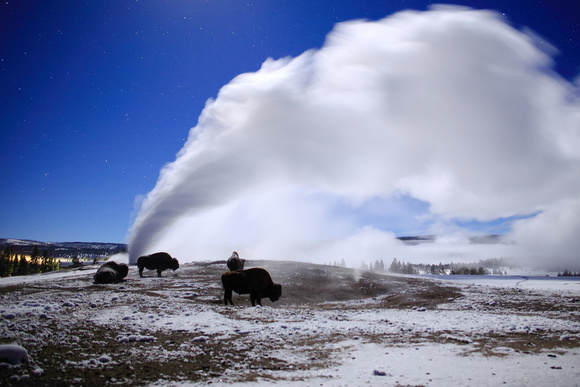 Seeking Warmth Under Steam And Stars

I walked so fast through the Winter starry night that I was almost running; the pace was the only way to stay warm. I would have run if I could, but the tripod and my camera gear made that idea impractical. The air felt sharp as a razor, and the snow on the ground was so crisp that each step sounded like the crushing of an open bag of potato chips against my ears, muting out nearly all conversation and even distracted my thoughts. The temperature was so cold that each exhale resulted in a cloud of frost, and I frequently touched my exposed face to make sure I still had feeling, as well as to muse at the ever-growing ice-cycles clinging to my beard and mustache. The numbness I felt from the bottle of tequila earlier in the night was starting to wear off and turn to numbness from exposure. Nearly two hours had passed out here and my vulnerability to the elements could not persist much longer, this was starting to get dangerous.

Somewhere between the crunching of the snow and thoughts of my demise, I suddenly realized that it had been nearly 90 minutes since Old Faithful had last erupted. And so with bitter decision, I chose to hike back to its steamy plume against the starry sky one last time – hoping that I would get there in time before the discharge. There would be no time to walk about and choose a smart perspective before it vented, so I had to accept the first unobstructed view I could find as I approached the scene.

At this point I am starting to not think clearly, and with fuzzy haste I surveyed the moment, concluding that I could compose a decent shot using the three big boulders in the foreground as the geyser steamed upward. I set up quickly and took a test shot. I looked it over, decided to alter the composition a little and then tried another shot, but 10 seconds into the exposure the camera shut down. My last set of batteries, fresh just 10 minutes before, had failed! Frustrated, cold, and numb, I loudly cussed at my camera with a barrage of expletives that would make a sailor blush. I pulled the batteries out to try and warm them against my icy hands for a few seconds, before slamming them back in and trying again. The camera magically powered up and so I shot, this time completing the exposure. Immediately after feeling satisfied with the framing, Old Faithful started to erupt. I triggered the shutter to capture the moment, but the batteries failed me once more, and my profane rage escalated. Thankfully no one else was around to hear it, except for my friend Brian who was there with me…if he said anything to me during this time I was too out of my head and distracted to listen. Still swearing, I cracked open my battery pack again, and blew warm air inside for a moment, before putting them back in, and voila I had power again. I thought to myself that I would only get one more chance at this, so I better make it count. Then suddenly, just as I was about to open my shutter, the weirdest thing happened – My landscape had changed!

WHAT!?!?! Why the *&^!%# are those boulders moving! One didn’t move at all. Another boulder laid down. The third boulder that was facing me turned sideways to show me its profile, and then a fourth boulder walked right into the frame out of nowhere, splitting the distance between me and the erupting geyser. “Those are bison!”, I exclaimed to Brian! Brian turned to me and said, “I know, I’ve been trying to tell you for the last 2 minutes to shut up!”. I would have shut up then, but I started to giggle at my lucky stupidity. Not only did I stumble on a great scene without realizing it, but these 4 mature bison bulls, that were much closer to me than any park ranger would ever suggest for safety, cared more for the warmth of the geyser steam than my steady venting of expletives. I went to trigger the shutter again, however in the previous moments of glee I failed to see that the camera had shut down again. I repeated my sacred rites with batteries, now just muttering my cuss words, powered up again, and finally got the shots before Old Faithful calmed back down.

Brian and I called it a wrap and then trudged our way for the next 10 minutes back to the cabin – giggling like school-girls about how ridiculous those moments were. Upon getting back to our shelter, we looked at each other, covered in white frost, and heartily laughed until we thawed enough to peel off our frozen and crusted layers. It was midnight, and minutes later I fell asleep; giggling transformed into snoring.
© 2022 John Morey Photography
Powered by ZENFOLIO User Agreement
Cancel
Continue