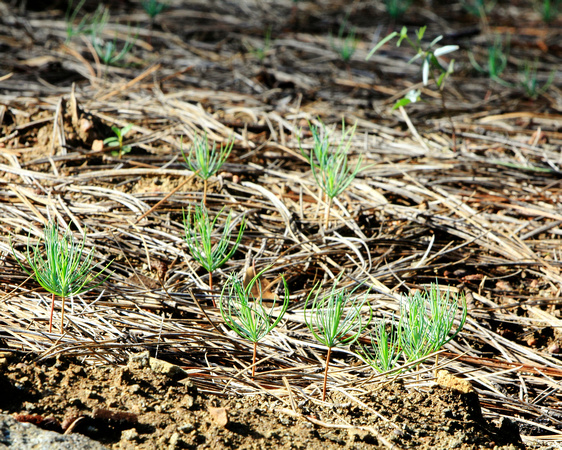 During about a one week period each year on my land, the entire forest floor "blooms" at once with seedlings of ponderosa pine trees pushing themselves above the pine-needled bed covering the ground. While relishing the moments and discovery of the entire ponderosa community giving birth at once, it suddenly occurs to me as pure murder, for it becomes physically impossible to take a single step in the forest without sacrificing some.

This is the way of nature I suppose, and I'm not much different than the other beasts of the Tonto National Forest which daily trample the floor with casual disregard, as they go about their lives. I am now a part of this forest, so I will do the same and not fret too much as I go about, yet always with respect for the grounds I walk on.

With this in mind, I pondered it further as I plucked one up out of the ground and then ate the entirety of its green sprigs, chewing with fond discovery of such a marvelous taste. I plucked another and then another, enjoying the moments and appreciated the pure nourishment of some type that must exist. Who would have ever thought I could eat a Ponderosa Pine tree in one bite?!?!?

Upon further research in my field guides, I then discovered why some adult pine trees go a good distance up and then just naturally split; not the charred split of a lightning strike, but the pure well-formed sudden division in its trunk to split off to two tops. Apparently the forest animals like myself also take nourishment in the young seedling sprigs, and when they bite off the top leaving the base, it will often shoot up a second sprig. And sometimes the original sprig recovers enough that both grow from there.
© 2021 John Morey Photography
Powered by ZENFOLIO User Agreement
Cancel
Continue