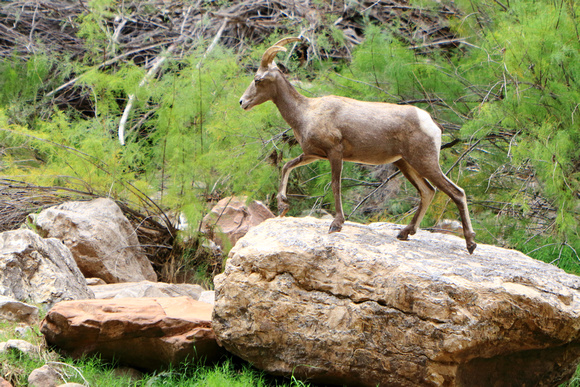 While rafting The Colorado River through The Grand Canyon, many evening rainfalls caused some side canyon tributaries to flash flood over night and then return to their normal course and flow by the next day. While I remained safe during these times, not all life does.

When I floated by a nearby side canyon I saw washed up dead on the sandy beach one of the biggest curled Big-Horn rams I've ever seen. No predation occurred here and no major physical damage existed from what I could see from my vantage point. Additionally while many Big-Horn Sheep die from falling off of cliffs, there were none that would allow this animal to directly fall into the water for miles in each direction. My best conclusion is that this ram was caught up in the nearby side canyon flood that most likely occurred the previous night.

As I pondered this tragedy in the normal course of life down here, I wondered if he was alone when the canyon flashed. Then just a mere 100 yards down-river, I saw what I can only believe was the rest of his herd -- still alive! The first animal I saw was this Big-Horn ewe, standing solitary on a large boulder, and it was looking back the direction of the corpse. Poised and motionless like a statue, I photographed the ewe; and then as if on command, she gave up on her once suitor and moved on to join the rest of the herd a little further ahead of her down-river. Life goes on after a last look back.
© 2022 John Morey Photography
Powered by ZENFOLIO User Agreement
Cancel
Continue