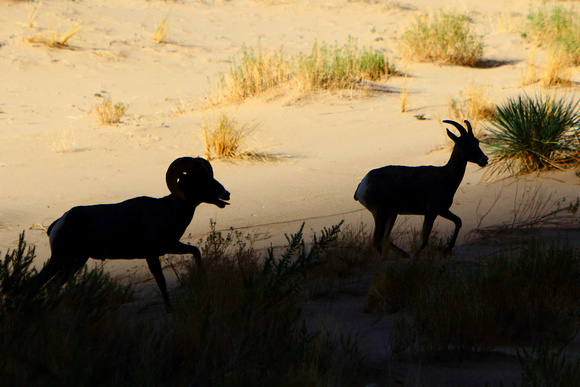 Where Are Ewe Going?

While floating down The Colorado River through The Grand Canyon, I had the great fortune to watch a small herd of Desert Big Horn Sheep near the shore-line. The herd consisted of about 3 Rams, 4 Ewes, and 5 lambs. During my observation, I witnessed the early beginning of the breeding season, as evidenced by this one particular ram who had previously confronted 2 ewes and 3 lambs.

The lambs got out of the way in fright while the Ram singled out the Ewe of his choice. The Ewe was not quite ready to accept this suitor, but his insistence was quite dominating and he would not take NO for an answer. The Ewe chose to do her best to evade him, but then the chase really began. For the next 10 minutes the pursuit continued at high speeds back and forth along the shore-line, until the other Ram in the herd got upset and joined the chase as well. Eventually all 3 ran over a hill out of view.

In this image I chose to expose for the brightly lit back-ground as the chase entered an area of shadow, thus creating this wonderful silhouette of the behavior.
© 2022 John Morey Photography
Powered by ZENFOLIO User Agreement
Cancel
Continue