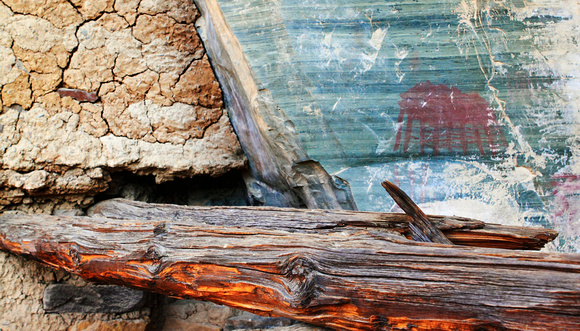 The various cliff-ruins of the Sierra Ancha Wilderness are steeped in mystery and legend, for these people came, flourished, and then vanished without a trace in 1300 A.D., leaving only their magnificent cliff dwellings, some pottery shards, and pieces of bone. Scientists fiercely debate both the exact culture of Ancient American that inhabited these ruins, as well as the causes of their very sudden disappearance. It is generally agreed that these people were a faction of the Salado Tribe, and their move North and total change of habitat seems to correlate with a great drought around the same time and the warlike factions which were believed to exist in the area due to these conditions.

Pueblo Canyon, where this image was taken, shows carbon dating ranging from about 1275A.D. to maybe 1350A.D. then nothing...no clues...no trace. Their existence here was brief, but after my many visits and studying of these terrains and strategic habit locations, it is quite clear to this photographer that they were surrounded by a siege.

In this image, the pictograph on the wall gives me a sense that they were very much praying for rain.
© 2021 John Morey Photography
Powered by ZENFOLIO User Agreement
Cancel
Continue