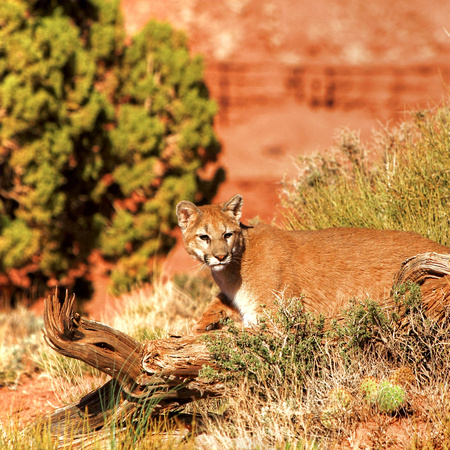 Mountain lions are not the largest predators in temperate North America, being far outweighed by grizzly and black bears, but bears are omnivores and rely more on plants than on meat. In this, and in the way they use their hands and feet, bears are like humans. Mountain lions are true carnivores, living almost exclusively on animals--preferably deer--that they themselves kill. Wolves have a similar diet, but they procure it through family cooperation in a way that is easily observed and appreciated by humans. Lions live and hunt alone, except for mothers with young.

They seem magically elusive, able to remain invisible even when the landscape is clearly imprinted with signs of their passing. They are agile enough to traverse the roughest country, and strong enough to kill animals much larger then themselves. People rarely see these elusive cats, but when encountering the cougar for the first time, it is always indelibly etched on the consciousness.
© 2021 John Morey Photography
Powered by ZENFOLIO User Agreement
Cancel
Continue