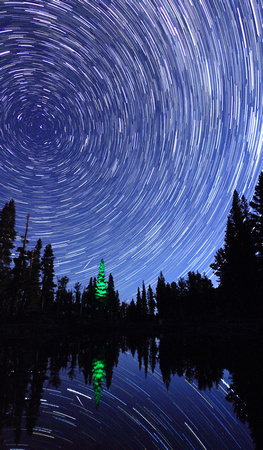 “Before we invented civilization our ancestors lived mainly in the open out under the sky. Before we devised artificial lights and atmospheric pollution and modern forms of nocturnal entertainment we watched the stars. There were practical calendar reasons of course but there was more to it than that. Even today the most jaded city dweller can be unexpectedly moved upon encountering a clear night sky studded with thousands of twinkling stars. When it happens to me after all these years it still takes my breath away.” ~ Carl Sagan

In the Ansel Adams Wilderness during August, I had the pleasure to live at 10,000 foot elevation for several days and experience a sky that goes largely unseen to many of us. A sky where the Milky Way, moon present or otherwise, is a clear band all the way from the Northern horizon down to our Southern Horizon. The Big Dipper looks like it is pouring the sky full from one side to the other -- while Polaris hung like a jewel pinned in the top left of my frame as the universe seemingly danced circles around it.

Upon the edge of still waters, I turned my tripod upside down and twisted the legs till the camera body hung upside down itself, literally less than a half-inch off the water's surface of one of the Clark Lakes. The angle was important for I wanted a sweeping mirrored view of the sky and water, as both the Milky Way spun around Polaris, simultaneously with the beginning of the Perseid Meteor Shower. The stillness of the water allowed me to track the sky as well in the water's reflection.

This is just a handful of images out of over 600 captured in a time-lapse sequence from a little past midnight till a little past 4am. The foreground light changes slightly through the sequence due to the rise of the crescent moon and Venus courting each other.

In a bit of self-indulgence to affect the environment around me, I painted the top of single pine tree green with an LED flashlight throughout the sequence to add to the balance of the image, composed with the meteors, Polaris, and the Northern band of the Milky Way.
© 2022 John Morey Photography
Powered by ZENFOLIO User Agreement
Cancel
Continue