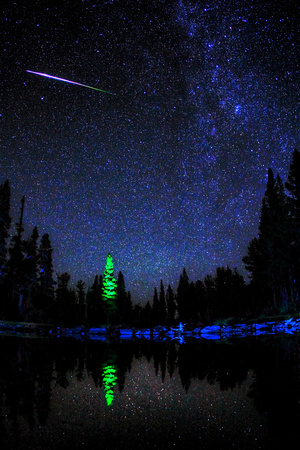 “I have realized; it is during the times I am far outside my element that I experience myself the most. That I see and feel who I really am, the most! I think that's what a comet is like, you see, a comet is born in the outer realms of the universe! But it's only when it ventures too close to our sun or to other stars that it releases the blazing "tail" behind it and shoots brazen through the heavens! And meteors become sucked into our atmosphere before they burst like firecrackers and realize that they're shooting stars! That's why I enjoy taking myself out of my own element, my own comfort zone, and hurling myself out into the unknown. Because it's during those scary moments, those unsure steps taken, that I am able to see that I'm like a comet hitting a new atmosphere: suddenly I illuminate magnificently and fire dusts begin to fall off of me! I discover a smile I didn't know I had, I uncover a feeling that I didn't know existed in me... I see myself. I'm a shooting star. A meteor shower. But I'm not going to die out. I guess I'm more like a comet then. I'm just going to keep on coming back.” ― C. JoyBell C.

In the Ansel Adams Wilderness during August, I had the pleasure to live at 10,000 foot elevation for several days and experience a sky that goes largely unseen to many of us. A sky where the Milky Way, moon present or otherwise, is a clear band all the way from the Northern horizon down to our Southern Horizon. The Big Dipper looks like it is pouring the sky full from one side to the other -- while Polarius hung like a jewel pinned in the top left of my frame as the universe seemly danced circles around it.

Upon the edge of still waters, I turned my tripod upside down and twisted the legs till the camera body hung upside down itself, literally less than a half-inch off the water's surface of one of the Clark Lakes. The angle was important for I wanted a sweeping mirrored view of the sky and water, as both the Milky Way spun around Polarius, simulatenously with the beginning of the Perseid Meteor Shower. The stillness of the water allowed me to track the sky as well in the water's reflection.

This is just one image out of over 600 captured in a timelapse sequence from a little past midnight till a little past 4am. The foreground light changes slightly through the sequence due to the rise of cresent moon and Venus courting each other.

In a bit of self-endulgance to affect the environment around me, I painted the top of single pine tree throughout the sequence to add to the balance of the image along with a light painting of blue on the opposite shoreline, composed with the meteors, Polarius, and the Northern Band of the Milky Way.
© 2022 John Morey Photography
Powered by ZENFOLIO User Agreement
Cancel
Continue