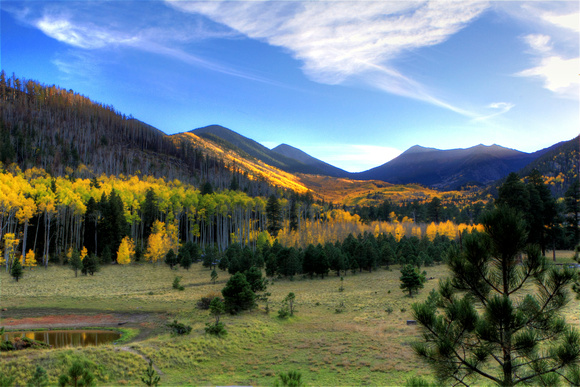 "Autumn is the eternal corrective. It is ripeness and color and a time of maturity; but it is also breadth, and depth, and distance. What man can stand with autumn on a hilltop and fail to see the span of his world and the meaning of the rolling hills that reach to the far horizon?" ~ Hal Borland

Photographed at Lockett Meadow, near Flagstaff, Arizona. Aspen is probably North America’s most abundant tree, due to its widespread occurrence. Additionally, and less appreciated, aspens are probably North America’s and the world’s largest individual life forms. Due to the clonal habit, thousands of shoots (ramets) are linked together to form one individual covering tens of hectares. While there has been no systematic search for the largest aspen clone, one clone near Salt Lake City, Utah, named ‘Pando’ (Latin for ‘spread’) is estimated to exceed 5,000 tons, about 3 x greater than the largest giant sequoia tree. The aspen clones thus dwarf conifers and certainly whales. These clones also are bigger organisms than the forest fungi that have been recognized to be large life forms and were previously claimed to be the world’s ‘largest living thing’.
© 2022 John Morey Photography
Powered by ZENFOLIO User Agreement
Cancel
Continue