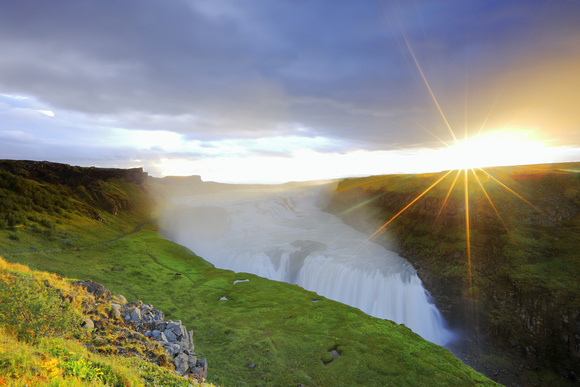 “Every moment is a golden one for him who has the vision to recognize it as such.” ~ Henry Miller

After several belabored days being crushed by poor weather and mediocre photography under such conditions, I found myself fighting hard to appreciate each of our location visits. The first three days were very difficult with only occasional moments of joy. Two days prior to this morning, we had stopped at what was supposed to be an amazing waterfall called Kirkjufell, but the side-ways driving rain from the super-strong winds made this an impossible task to photograph. Myself and a few others got up with a “never say quit” feeling to go out and try our best, but after merely going outside to the back of the vehicle to get my gear, I ran back inside knowing I was going to be beat this day. I admired the zeal of the 3 others who trudged out there with their gear, disappearing in a few mere steps by the horrible visibility brought on by the storm. While I sat there and mused to myself how crazy those guys are, I wondered if I was just falsely justifying my own desire to not be frustrated, but then the wind shook the entire vehicle again, rocking it back and forth strongly while we sat there waiting, and reminded me again why I justified staying in.

After awhile those guys came back, with really nothing to show for it, other than very wet cameras and lenses, as well as one other thing – Smiles! One of the men who went out, Brian, looked at me and said “I’m really surprised you at least didn’t run out there without your gear to at least see it and enjoy the moment”. I sank in my chair, slightly embarrassed. He was right, and that wasn’t me. I took the vision of that thought to heart for the following days and made the best of each moment, despite the weather, despite my goals. Fast forward two mornings later when the worst of the storming had finally subsided back to the “normal” dicey Icelandic weather, we arrived at Gullfoss in the rain again, however some of the clouds on the horizon of the rising sun did seem a little broken. Ian, my trip leader, was heard once again saying “If you don’t like the weather in Iceland just wait 15 minutes, because it can often change that quickly”.

We started our approach high above for a grand view of all below us. Later we descended a bit to another approaching vantage point for a different perspective (where this image was taken from), but the lighting was not really good at that moment in the drizzling rain – at least down here there was a bit less wind. Finally the workshop leaders instructed us to follow the path down to the very top of the falls where you could photograph upstream or downstream. However down there close to the falls, the windy mist from Gullfoss made getting any shot without water spots near impossible for me. I was starting to feel that frustration again, looking around desperately for any reasonable shot to take, and wondered if perhaps I just needed to set down the camera and sit back and enjoy; so that is what I did for a short while. I was no longer trying, but rather just open to any moments I would have and whatever happened during that time. This felt good to me while I viewed other’s frustrations and silently thanked myself for having the vision to recognize what would keep me sane here. Moments later, the clouds broke and the rising sun beamed through to the cliffs above and behind me, from where we had hiked down from the 2nd vantage point. Rather than starting to fight the wet mist again to photography those lit cliffs, I realized myself and the group were really in the wrong place, at least as far as I was concerned. I was tired of forcing shots, and the sun showed me where I needed to be. I excused myself from the group and walked solo back up to the 2nd vantage point. The sun was still shining, but I knew it would very quickly disappear behind the clouds soon. A solo figure up on the hill, I composed the golden shot I had envisioned, and then successfully executed it. Moments later the sun disappeared and did not return again for the rest of the morning.

The rock of the river bed was formed during an interglacial period and Gullfoss is an example of a waterfall forming where the water has followed a fissure in the lava-laden landscape and carved a passageway through it. The falls themselves consist of a three-step cascading staircase, which then abruptly plunges in two stages into a thundering 2-mile long, 105 foot deep crevice, about 66 feet wide. As one first approaches, you can hear the thunder of the falls, but the crevice is obscured from view, so that it appears that the mighty river simply vanishes into the earth with its rising mists shining in the sunlight where the water ought to be, such as seen in this image just after sunrise. On a sunlit day, the mist clouds surrounding the hammering falls are filled with dozens of rainbows, providing an unparalleled spectacle of color and motion. I wish I could have stayed longer.

Like so many other Icelandic location names that are difficult to pronounce and spell, they are simple in translation for what they actually mean, unlike how we give less descriptive names to our locations of interest in America. If you pay attention to Icelandic location names, you can begin to understand the meaning of many Icelandic words quite quickly. Gullfoss means “Golden Waterfall” (Gull = Golden; Foss = Waterfall). How quaint and simple is that?
© 2022 John Morey Photography
Powered by ZENFOLIO User Agreement
Cancel
Continue