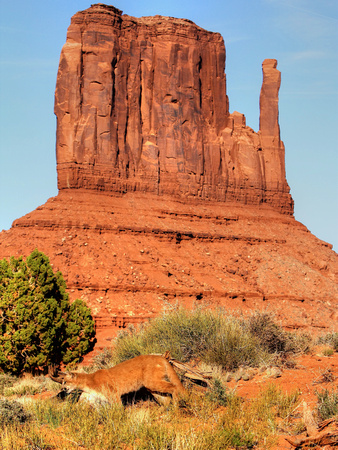 Humans have always been in awe of Puma Concolor, the cat of one color, also known as the puma, mountain lion, cougar, or in the secret whispers of the Navajo as “Nashtuítso”. This largest of the small, non-roaring cats used to be found across North America and when Europeans arrived in the Americas, mountain lions ranged from Canada to Tierra del Fuego; from the coasts of both oceans to the peaks of the Appalachians, Rockies, and Andes. The only large mammals more widely distributed throughout the western hemisphere were humans, so every Native culture except those in the Arctic encountered lions.

Prior to Columbus, the Navajo and other Native Americans of the Southwest had domesticated turkeys for feathers used in prayers, along with domestication of dogs to pull baggage and perhaps flush small game. But no North American Natives tended livestock at the time, thus no conflict really existed with mountain lions or other large predators.

However, sheep assumed enormous importance to the Navajos after 1868, when the Tribe was allowed to return to its home land. In partial repayment, the U.S. government issued thirty-thousand sheep to the remaining nine thousand Navajos. As they worked to rebuild their lives, Navajos counted the number of sheep they owned, regardless of how scrawny or parasitic, as a status symbol. The range was overgrazed and serious erosion resulted, which continues today. And since the mountainous portions of the seventeen million-acre Navajo Reservation offered good bear, lion, and wolf habitat, conflicts with predators became a factor in Navajo life. With The Navajo tying so much legend, mysticism, and life-guiding stories to Nashtuítso and other animal spiritual beings, this new conflict created more than just physical problems, but spiritual as well.

To cope with the physical power of these spiritual beings, the Navajo Nation in 1956 borrowed a wildlife manager from the U.S. Fish & Wildlife Service to set up a tribal wildlife department -- the first such entity on any reservation. Its major aim was to reduce the number of predators. In 1961, for the first time, a Navajo was paid a bounty for killing a mountain lion. Mountain Lions are not officially listed as endangered anywhere in the West, nor are they hunted by the Navajo anymore, yet very little is known about current lion populations in this region of the world. However, the Arizona Game and Fish Department estimates the state’s mountain lion population is robust and increasing, at 2,500 to 3,000 cats.
© 2022 John Morey Photography
Powered by ZENFOLIO User Agreement
Cancel
Continue