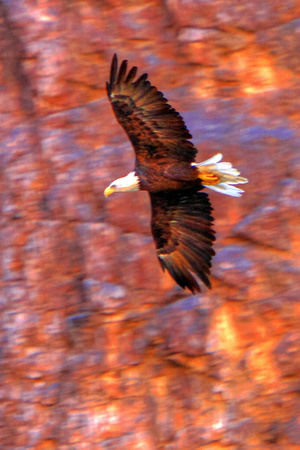 Bald Eagle Of The Southwest

This is one of many eagles I regularly see around the Salt River, and its many lakes and reservoir system. This particular one was photographed at Canyon Lake, Arizona, as he is fishing for dinner. I panned the camera as he flew by against the sandstone cliffs behind for this artistic effect. The metrics of their success is at an all time high with promises of continued good fortune.

The Southwestern Bald Eagle Management Committee has helped rebuild the bald eagle nesting population in Arizona since its formation in 1978. At that time, there were 11 breeding pairs of bald eagles in the state. Last year (2011), 55 breeding areas were occupied, 79 eggs were laid and 56 nestlings took flight, all records for bald eagles in Arizona. But for the first time since 1978, they will not be on the federal list of endangered and threatened species. The birds still receive some protection under the federal Bald and Golden Eagle Protection Act and the Migratory Bird Treaty Act, as well as the state's Conservation Assessment and Strategy for the Bald Eagle in Arizona.
© 2022 John Morey Photography
Powered by ZENFOLIO User Agreement
Cancel
Continue