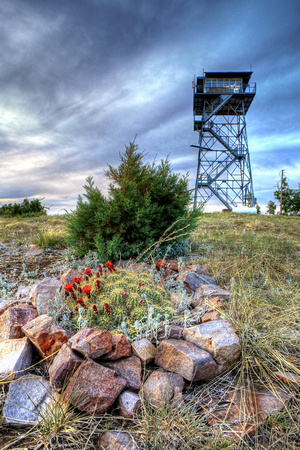 "That's the best thing about walking, the journey itself. It doesn't matter much whether you get where you're going or not. You'll get there anyway. Every good hike brings you eventually back home." - Edward Abbey

When I come to this mountain, I can imagine the spirit, solitude, and passion of noted Arizona essayist and novelist Edward Paul Abbey (January 29, 1927 – March 14, 1989) living in this solitary station on this mountain top. He lived for three summers (1977, 1978, and 1979) within this very fire lookout tower of Aztec Peak, in the Sierra Ancha Wilderness Area of Tonto National Forest. This work experience became the source of multiple references within “Confessions of a Barbarian”. This lookout tower itself was constructed in 1956 and is listed on the National Historic Lookout Register at US#192 and AZ#02.

Forest trail 151 (Abbey's Way) is a beautiful hike ascending the mountain to the tower, which ends at the point this image was taken.
© 2021 John Morey Photography
Powered by ZENFOLIO User Agreement
Cancel
Continue