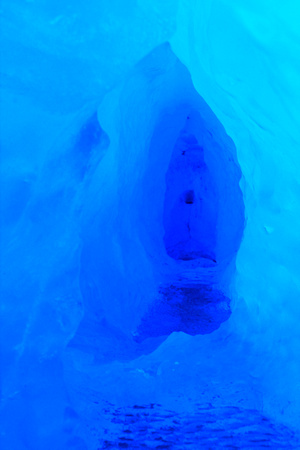 My feet were icy-wet through the climbing boots, while stumbling upon fragile chunks of watery ice that previously led me to believe I had a solid surface -- 60 feet below any sense of what I knew before to be my world above. Encumbered by 20lbs of photography equipment, ice axes tethered to my wrists, and crampons stabbing for a hard surface to hold to, I wondered where will my fleeting courage would take me. Practically alone, with help too far away for immediate response, but tethered to a life-line snaking through the sinuous and craggy passageway, I trudging slowly through a blue world that is alien, but at my heart similar to my own personal fortress of solitude. Every step forward into the the passage was a step of faith -- similar to my life in many ways -- that something in that deep blue water below me would hold me aloft and not suddenly plunge me into the next sunken moulin that perhaps awaits. How deep does it go I wondered???

This was photographed near Seward, AK, on what is known as "Exit Glacier". When adventurers first crossed the Harding Ice Field, this glacier got its name for being the exit route taken. I spent 8 hours on and in this glacier doing technical ice climbing to capture some very unique images that will never be reproduced exactly like this, because the glacier lives and changes daily.

Exit Glacier is a glacier derived from the Harding Icefield in the Kenai Mountains of Alaska. It received its name because it served as the exit for the first recorded crossing of the Harding Icefield in 1968. In the spring of 1968, the first documented mountaineering party succeeded in crossing the Harding Icefield. Ten people were involved in the crossing, which went from Chernof Glacier east to Resurrection Glacier (Later renamed Exit as the newspaper reported that the group would be descending the "Exit Glacier").
© 2022 John Morey Photography
Powered by ZENFOLIO User Agreement
Cancel
Continue