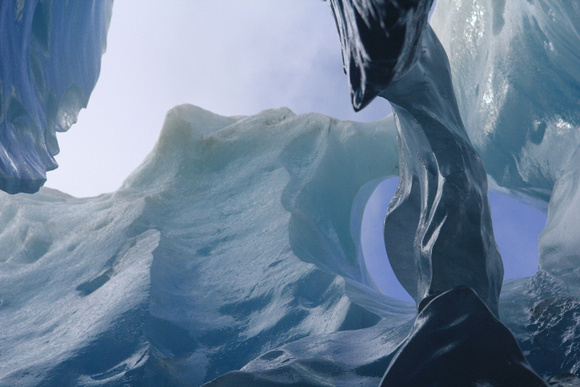 I got myself into this hole and there was only one way out, back up. Well, it wasn’t a hole precisely, it was vertical ice shaft known as a moulin, which due to a glacial shift 5 days prior had caused glacial top water to find a new weakness in the ice, and through percolation carve out this tube to a depth of 60’ below, where it then found a horizontal weakness and carved a tunnel passageway for another 30’ before the water escaped to some unknown vent that I couldn’t follow. Then just 2 days prior, the glacier shifted again, redirecting the surface water a mere 15’ away from the previously carved moulin and was now working a new tube in front of my eyes. It is suicide to go down one while it is running, so I very thankful the water had shifted and allowed me this wonderful opportunity to explore the temporary remnants of the now “dry” ice shaft. Getting in and getting the shots was one thing, but getting out was another.

I was exhausted, but my extreme inexperience (fear) along with negotiating the tenuous holds my crampons and ice axes had on the vertical, mirror-smooth ice wall (much more fear) kept me exhilarated enough to continue to push my way back upward from where I previously belayed to. Half way back up I finally found a temporary shelf in the moulin which allowed me a short respite, where I placed my left boot onto it while the other was wedged into the crag of an ice cleft on the right, straddling the tube with my ropes dangling below as I rested.

As a photographer in the wild areas, I often find myself winded from exertion, and in those moments where I have to rest, I’m thankful to use my need to photograph the moment as the reason for my stoppage. As I rested, looking up at the way I’d have to navigate my final escape, I photographed this mysterious and other-worldly view of the glacier above me. It was the most beautiful thing in the world to me. Everything about this moment was right, being a unique spectator of the beautiful mysterious.

Exit Glacier is a glacier derived from the Harding Icefield in the Kenai Mountains of Alaska. It received its name because it served as the exit for the first recorded crossing of the Harding Icefield in 1968. In the spring of 1968, the first documented mountaineering party succeeded in crossing the Harding Icefield. Ten people were involved in the crossing, which went from Chernof Glacier east to Resurrection Glacier (Later renamed Exit as the newspaper reported that the group would be descending the "Exit Glacier").
© 2023 John Morey Photography
Powered by ZENFOLIO User Agreement
Cancel
Continue