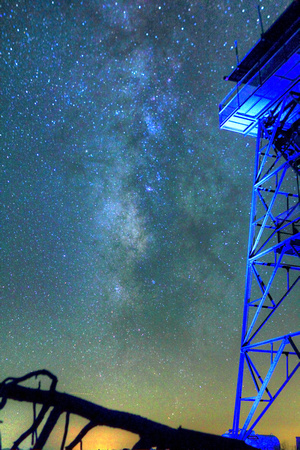 The Radiations Of Their Personalities

"The lights of stars that were extinguished ages ago still reaches us. So it is with great men who died centuries ago, but still reach us with the radiations of their personalities." ~ Kahlil Gibran

Just like many of the stars in this image probably don't exist anymore, yet we still see the report of their shiny station in the cosmos, so too do I feel the spirit, solitude, and passion of noted Arizona essayist and novelist Edward Paul Abbey (January 29, 1927 – March 14, 1989) living in his own shiny station on this mountain top. He lived for three summers (1977, 1978, and 1979) within this very fire lookout tower of Aztec Peak, in the Sierra Ancha Wilderness Area of Tonto National Forest. This work experience became the source of multiple references within “Confessions of a Barbarian”. This lookout tower itself was constructed in 1956 and is listed on the National Historic Lookout Register at US#192 and AZ#02.

This image is just one of over 900 images extracted from the astrophotography timelapse sequence I shot two mornings ago of the Milky Way as it crossed across the sky during the last new moon cycle.
© 2021 John Morey Photography
Powered by ZENFOLIO User Agreement
Cancel
Continue