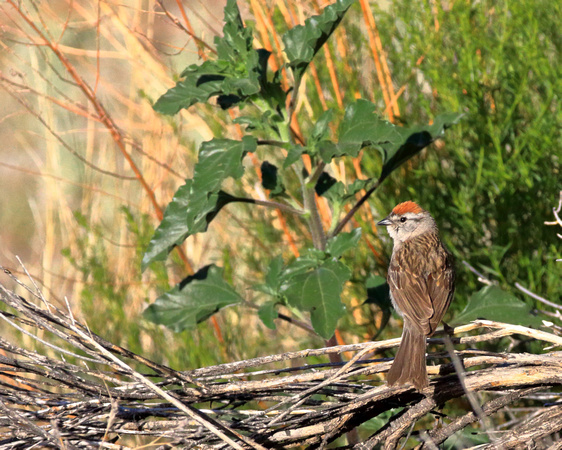 As a resident of Flagstaff, there is an abundance of nearby local outdoor treasures that I call my backyard, places I can rush to in half an hour or so to catch a scene, or just to park and chill and think about life. What's great is that I can do both at the same time and usually when I am deep down a hole somewhere thinking of something else and not present to my environment, the environment reminds me to be here and now. I am thankful.

Over just outside the entrance to Sunset Crater National Monument is such a place, called 'Bonito Park'. In any given solitary moment waiting for life to go by, I am usually witness to something while I sit around; Pronghorns playing, hawks predating field mice, western blue birds scurrying about supporting their nests in the nearby pines. And not so less special are the other little miracles of foraging life, common or otherwise.

Such is the case with Mr. Chippy-do-da here, a male Western Chipping Sparrow in breeding plumage. Of the Western species, there are two subspecies, this being one and arguable the more common...He is Spizella passerina arizonae and is associated with the mountains and arid habitats of the western interior.( the other more of a pacific slope environment)..kind of neat that for such a widespread bird, his subspecies namesake is Arizona.

While the orange cap is always present, it is particularly prominent during the summer breeding months and this guy is sitting exactly where one would expect him to be at this moment. He arrived here around mid-May, a week or so before the lady-birds, a scouting mission of sorts and to start planning on setting up shop. After the arrival of the ladies and courting begins and pairs are formed, then nesting begins, etc.

He selected this spot in Bonito Park because it is a grassy, open woodland clearing with other grassy-like shrubs, sprinkled with the occasional single or grouping of small conifers in which to build his nest; built from grass, rootlets, with an inner cup of plant fiber and animal hair. Its not hard to find the animal hair here, with a local herd of Pronghorn Antelope that are almost always in the meadow somewhere at any given moment. Life is good for Chippy, all the chippy-do-da-day.
© 2022 John Morey Photography
Powered by ZENFOLIO User Agreement
Cancel
Continue