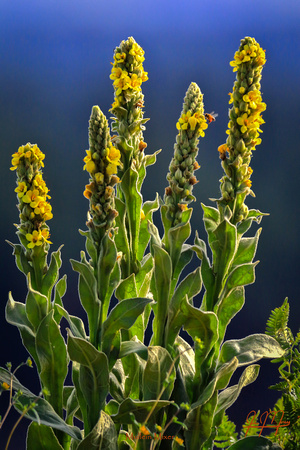 Mullein Mixer
If you ever hear me call you a wooly mullein-head, consider it a term of endearment...here is a 1st year growth cluster of them in bloom, along with a pollinating bee in the mix to punctuate the gift this common plant is too the world...if you don't have bees in the world, it would be drastically different.
Verbascum thapsus, the great mullein or common mullein, is is a hairy-leaved plant that can grow to 5' tall or more. Its small, yellow flowers are densely grouped on a tall stem, which grows from a large rosette of leaves. It grows in a wide variety of habitats, but prefers well-lit, disturbed soils, where it can appear soon after the ground receives light, such as in areas after fire damage, where I often see it.
"Mullein" itself derives from the French word for "soft" and sometimes western United States residents like myself refer to mullein as "cowboy toilet paper". In the 19th century it had well over 40 different common names in English alone. Some of the more whimsical ones included "hig candlewick", "indian rag weed", "bullicks lungwort", "Adams-rod", "hare's-beard" and "ice-leaf". Vernacular names include innumerable references to the plant's hairiness: "woolly mullein", "velvet mullein" or "blanket mullein", "beggar's blanket", "Moses' blanket", "poor man's blanket", "Our Lady's blanket" or "old man's blanket", and "feltwort", and so on.
All Rights Reserved
Powered by ZENFOLIO User Agreement
Cancel
Continue