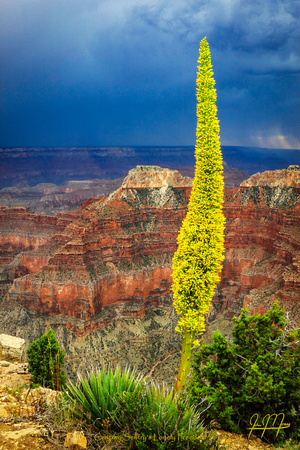 "The farther one gets into the wilderness, the greater is the attraction of its lonely freedom." ~ Theodore Roosevelt

In a remote area of the Grand Canyon's North Rim, I camped at Point Sublime for 2 days waiting for the correct lighting to photograph this beautiful century plant, and agave known as Agave utahensis subspecies kaibabensis. I've seen many like it, but to find the entire plant in healthy bloom at the same time is a bit of a rarity.

Agave utahensis is one of the more common agaves of the Southwest, ranging from the low elevation Mojave Desert of California and Nevada eastwards to the North Rim of Grand Canyon at 8,000 feet.

The kaibabensis subspecies, pictured here, has a limited distribution, found in north Arizona, in the vicinity of the Grand Canyon and the eastern end of Lake Mead.


Point Sublime, on the North Rim of the Grand Canyon, is one of the most breathtaking vistas anywhere in the Grand Canyon! And in fact is the only place on the edge of the North Rim that allows a view of the mighty Colorado River. The remoteness of this area makes it less frequented than other scenic views in the park. However with a 4WD vehicle, one can drive 20+ miles and literally park on the point and enjoy the splendor!