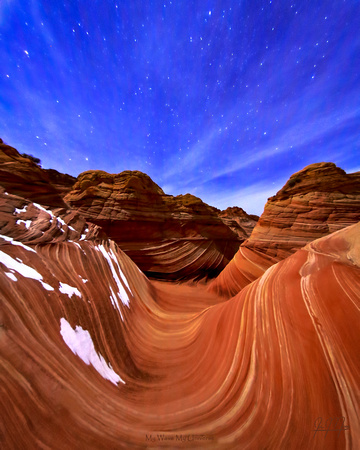 My Wave My Universe

The "Wave" of Coyote Buttes, in the Vermilion Cliffs / Paria Canyon Wilderness, of Northern Arizona, photographed shortly after night fall.

To be in "The Wave" of sandstone swirling colors and texture is a treasure in its own right. But to behold a sparkling sky of diamonds pulsating above it, while the sandstone is lit up by the half moon's light is truly a humbling perspective, as you reflect upon the universe and come to terms with your miniscule function in it -- as if I am just one of a trillion waves in the ocean, washing up on the shores of universal experience.
© 2020 John Morey Photography
Powered by ZENFOLIO User Agreement
Cancel
Continue