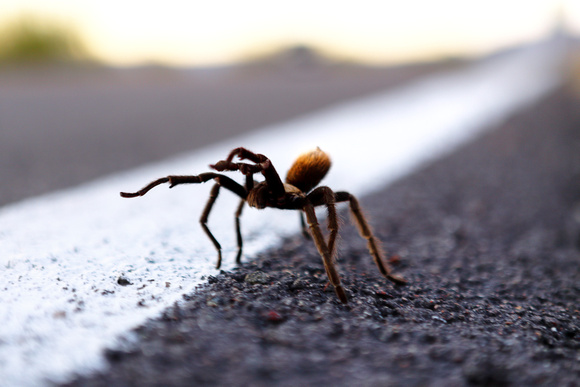 "Bottom line, know your role with someone before you cross the line." ~ Unknown.

Tarantulas are the largest spiders in the world. In the United States, they are mostly found in the Southwest. A female tarantula can live 20 - 25 years, however a male tarantula only lives less than half that. During most of the year tarantulas are nocturnal and stay close to their burrows, but during mating season, 8 to 10 year old males, like this fella, leave their burrows to search for receptive females with which to mate. Tarantulas may walk considerable distances to achieve this goal and this is when people, or cars, or predators are most likely to encounter a tarantula.

When threatened a tarantula will rear up on its back legs exposing its fangs, like this fellow is doing, and if seriously threatened the tarantula may eject hairs from its abdomen that are coated with venom. Although tarantulas do have venom and can bite, they pose no serious danger to humans.

When a male tarantula finds a female (he does this by scent), he approaches the entrance to her burrow and taps on thin strands of web that lead into the burrow. If willing, the female will exit the burrow and mating will occur. However if the female is hungry, she may make her anxious suitor her next meal, which goes back to the title quote of this image...know your role with someone before you cross the line.
© 2021 John Morey Photography
Powered by ZENFOLIO User Agreement
Cancel
Continue