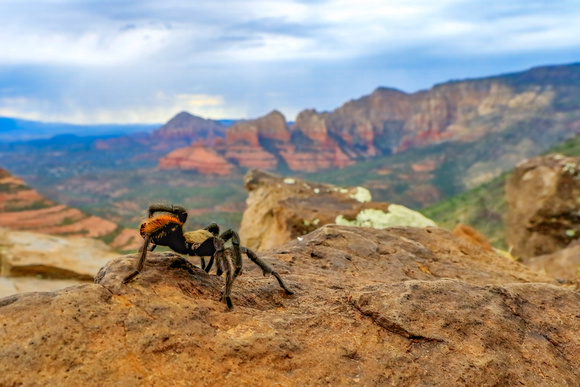 "Boot-laces shuffle untied, and wiping the sleep from my mind’s eye, I stumble back through the rocky terrain, thinking my first-light effort was certainly in vain.

Golden-moments too brief, and overcast storm-skies framing my grief, I trip again throwing my hand to catch the next rock, without mutter or cry just elated shock.

A hairy arachnid desert alumni and some would think quite an unattractive guy, I smile despite tired vision and brain, a handsome male brought out by the monsoon rain.

Driven by instinctual belief and roaming the risk like a desert thief, I relate to the drive, the yearning, the purpose of his walk, venturing it all on an unlikely wedlock.

For myself a sigh as I felt some relief, and then I mused how he’d vie, probably as an aperitif. For myself some pain as I took self-stock, and then I wished he’d abstain, from walking that walk.

For myself a lie as I felt some grief, and wondered if I could ever defy my own self-belief. For myself more pain as I started to mock, only the insane would keep walking that walk." ~ Jack Mountain

Photographed above Sedona near Schnebly Hill and at the beginning of monsoon season. While my sunrise shoot never panned out, this desert tarantula (Aphonopelma chalcodes) walked across my path while returning to my Jeep. While I am surprised to see a male tarantula starting his walk this early in the season, I guess it was only muted by my surprise to find him here above Sedona, which is at the very end of its desert range.

During most of the year tarantulas are nocturnal and stay close to their burrows, but during mating season 10 year old males, like this fella, leave their burrows to search for receptive females with which to mate. Tarantulas may walk considerable distances to achieve this goal and this is when people, or cars, or predators are most likely to encounter a tarantula. When a male tarantula finds a female he approaches the entrance to her burrow and taps on thin strands of web that lead into the burrow. If willing, the female will exit the burrow and mating will occur. However, if the female suddenly becomes unaccepting (hard to imagine I know), she may make her anxious suitor her next meal, regardless of how well he walked the walk.

I wonder if the male tarantula is aware of his possible folly and is just driven in spite of it all, to risk everything on hope and belief. I wonder if he ever doubts himself on that journey. Of course, he doesn’t do these things, because he is not human…which I guess means he never knows disappointment either. One could speculate that to not know and have those things would be a blessing. One may even admire such a thing. I wish I could. I try. I can’t. And so somewhere between a hard-place and rock, I keep going walking that walk.
All Rights Reserved
Powered by ZENFOLIO User Agreement
Cancel
Continue