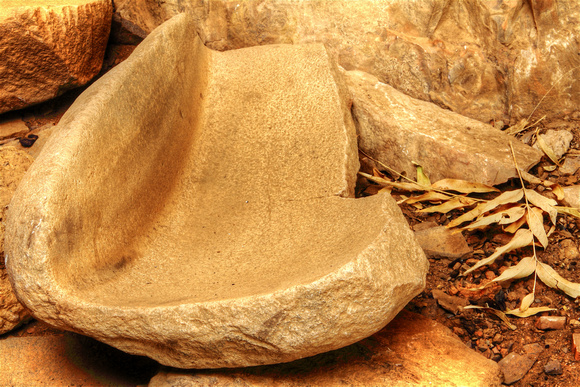 Soul Amid Their Ruins

“Of dead kingdoms I recall the soul, sitting amid their ruins” ~ Nathaniel Parker Willis

A metate (pronounced me·ta·te) is a mortar, a ground stone tool used for processing grain and seeds. In traditional Mesoamerican culture, metates were typically used by women who would grind calcified maize and other organic materials during food preparation. Similar artifacts are found all over the world. While varying in specific morphology, metates adhere to a common shape. They typically consist of large stones with a smooth depression or bowl worn into the upper surface. The bowl is formed by the continual and long-term grinding of materials using a smooth hand-held stone (known as a mano). This action consists of a horizontal grinding motion that differs from the vertical crushing motion used in a mortar and pestle.

This particular metate was photographed within the four-roomed, Salado Indian cliff-ruin known as “Devil’s Chasm”, found within the Sierra Ancha Wilderness Area of The Tonto National Forest, Arizona. This is one of many obscurely known and extremely difficult to visit cliff ruins in the wilderness area, which accounts for a good deal of preservation that still exists here, sadly however it is my understanding that someone has stolen this metate since the time I documented it. Devil’s Chasm, shows carbon dating ranging from about 1275A.D. to about 1310A.D. when it seems to have been abandoned and its occupants moved North to the next canyons, however after 1350A.D. no further clues exist to this culture’s demise...no clues...no trace.
© 2020 John Morey Photography
Powered by ZENFOLIO User Agreement
Cancel
Continue