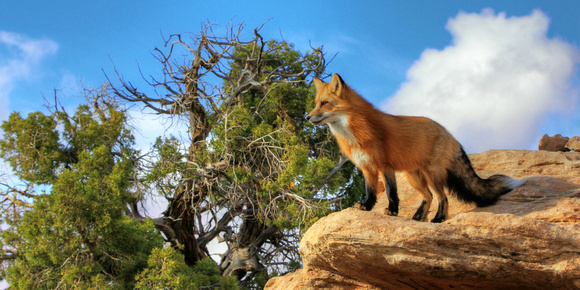 The red fox (Vulpes vulpes) is the largest of the true foxes and the most geographically spread member of the Carnivora, being distributed across the entire northern hemisphere. Red Foxes are fairly common residents on the Navajo Nation and really is the only part of Arizona where the Red Fox distribution gets to.

They tend to live at lower elevations than the Grey Fox, and are often found near homes within desert lands and pinon-juniper woodlands. Red foxes are omnivores, feeding mostly on small mammals, birds, and reptiles, but also on fruits, berries and nuts. Most of the red foxes native to the Navajo Nation are blond in color compared to the red/orange color typically found elsewhere.
© 2022 John Morey Photography
Powered by ZENFOLIO User Agreement
Cancel
Continue