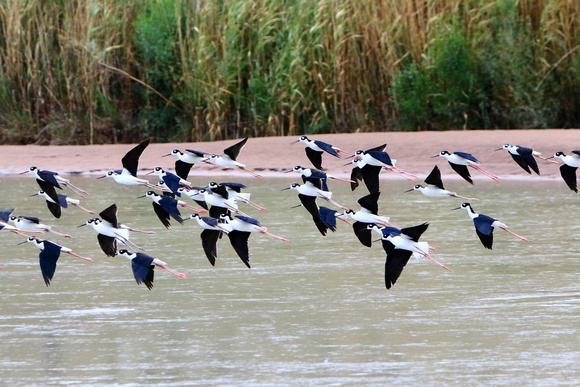 Flight Of The Black-necked Stilt

While rafting down the Colorado River, through the Grand Canyon, a flight of Black-necked Stilts is disturbed by my passing raft and took to the air as group, going back and forth along the river's edge, until we had passed.

The black-necked stilt (Himantopus mexicanus) is a locally abundant shorebird of American wetlands and coastlines. It is found from the coastal areas of California through much of the interior western United States and along the Gulf of Mexico as far east as Florida, then south through Central America and the Caribbean to northwest Brazil southwest Peru, east Ecuador and the Galápagos Islands.
© 2022 John Morey Photography
Powered by ZENFOLIO User Agreement
Cancel
Continue