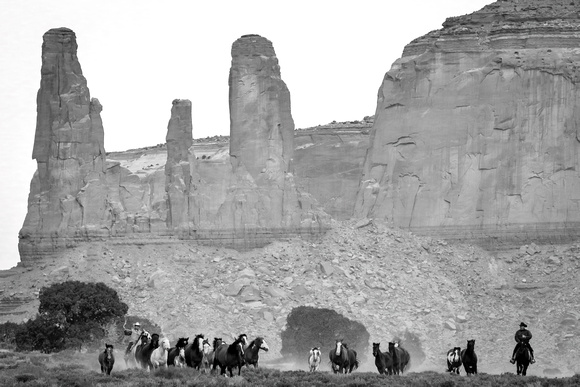 When it comes to capturing iconic Arizona imagery, perhaps nothing is more iconic and indelible to the Western motif as the ruddy mesa and dusty plains of Monument Valley -- nowhere more so than in director John Ford's films.

The location's popularity dates back to Ford's use of the Utah-Arizona border in 1939's Stagecoach. "I wouldn't make a Western on the backlot," Ford once said. "I think you can say that the real star of my Westerns has always been the land." It's no wonder then that Monument Valley appeared in the best of his films (nine in total), including Fort Apache, She Wore a Yellow Ribbon, and of course The Searchers.

Ford's Tombstone Western My Darling Clementine perfectly illustrates this love for the land. A stubborn realist who claimed to have consulted the real Wyatt Earp about the Battle at the O.K. Corral, Ford chose Monument Valley as the setting despite the fact that it lay nearly 500 miles north of the actual Corral. Perhaps he knew the limits of historical accuracy. More than that, he knew a star when he saw one. And while Monument Valley is a big place, John Ford's favorite backdrop was later renamed to be "John Ford Point", which is a mesa sitting next to geological feature of buttes known as "The Three Sisters", pictured in the background here.

In my attempt to pay tribute to John Ford, and this amazing land and culture, I was fortunate enough to capture this amazing image of Navajo men conducting a wild horse roundup next to The Three Sisters and John Ford Point.
© 2021 John Morey Photography
Powered by ZENFOLIO User Agreement
Cancel
Continue