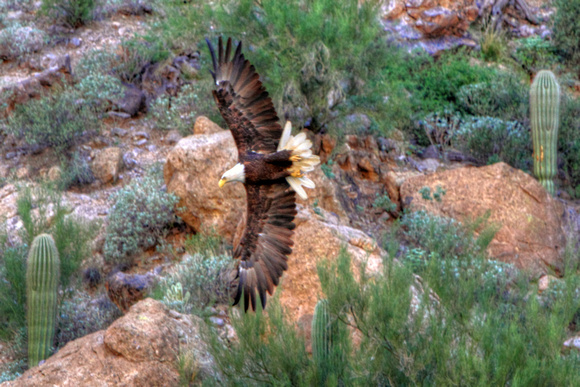 This Bald Eagle of Arizona is one of many that I often see living at Canyon Lake, AZ. In this scene, the eagle had been hovering over a part of the lake for several seconds, and is shown here making a sharp banking turn before diving to the water and making an attempt to catch a Rainbow Trout

The bald eagle in Arizona has experienced a large population increase since the species was listed under the Endangered Species Act in 1978. At that time, only 11 breeding pairs had been identified. Since then, multiple studies and intensive management projects have contributed to our knowledge of the bald eagle in Arizona, and the population has grown. This growth, not only in Arizona but nationwide, prompted the U.S. Fish and Wildlife Service to remove the bald eagle from the Endangered Species Act in 2007.

In 2008, a federal court order returned bald eagles living in parts of Arizona to the endangered species list until the U.S. Fish and Wildlife Service could complete a status review of the species. In 2010, the U.S. Fish and Wildlife Service decided that bald eagles in Arizona are not a separate and distinct population that needs protection under the Endangered Species Act (ESA), and the species in Arizona was officially removed from the Endangered Species List the following year.

Although the Arizona Game and Fish Department supports classifying the population as a distinct population segment for biological reasons, it supports removing the species in the Sonoran Desert from the list due to the existence of the Bald and Golden Eagle Protection Act and the comprehensive bald eagle management program led by Game and Fish.
© 2021 John Morey Photography
Powered by ZENFOLIO User Agreement
Cancel
Continue