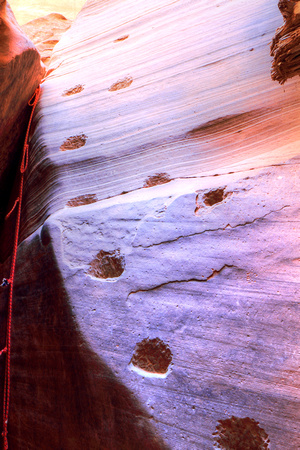 Moki steps, sometimes spelled alternately as Moqui steps, are a recurring feature found in areas of the American southwest previously inhabited by the Ancient Pueblo Peoples and other related cultures. The steps consist of alternating hand and toe holds carved into vertical or near-vertical sandstone surfaces. This particular image was photographed within Buckskin Gulch, of the Vermilion Cliffs / Paria Canyon wilderness, on the Arizona and Utah border.

About 12 miles in from the entrance of Wirepass, a large group of boulders make the most formidable obstacle you will probably face. To the left side is a 20' vertical drop, and "moki steps" are carved into the rock. In the middle of the boulder pile is a 15'down-climb, where a rope can be threaded as a hand-line or rappel line. While clearly this part of the trail has not changed much since these ancient steps were build, but remember that floods have formed this canyon and the nature of the canyon can change quickly and dramatically, so be prepared for circumstances not described.
© 2020 John Morey Photography
Powered by ZENFOLIO User Agreement
Cancel
Continue