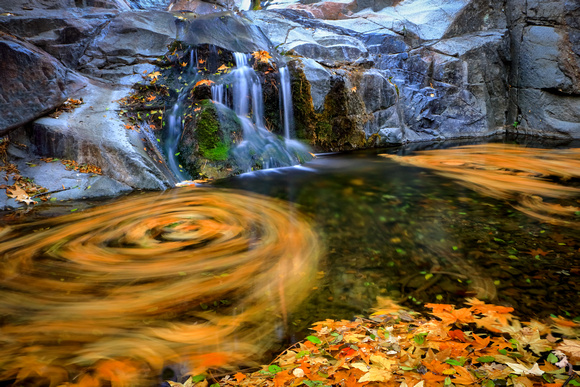 I’ve been here at least 2 dozen times over the past 2 dozen years. More often since I bought The Lazy J, a mere 10-minute walk to this sanctuary of water flow known as “The Tubs” of Workman Creek. The feature consists of a series of semi-deep sitting and wading pools that cascade through smoothed granite levels in a rapid descent down to this final pool, where the stream continues on in normal fashion. Sometimes I just have been out in the bush too long in the summer and need a private place to wash up, other times acting as a tour guide to friends who visit me here. But in Autumn, it is pretty much a must visit for me to sit side by side with the cascades enjoying the swaying sycamores, yet never have I left with anything I’ve ever been really photographically happy with. And now I am here again, and it is near noon on a semi-bright/cloudy day; OK for recreational snapshots as usual, but tough conditions and lighting in a semi-messy and breezy scene usually leave me just enjoying the mental memory card. Uninspired I concluded that what I needed was to think outside the box this time…a different approach…stretch myself.

The idea came quickly, along with my typical historical resistance, as it would be a technical exercise that would require a bit of tedious effort. This is not an easy scene to shoot, and the wind might not cooperate, and the sun might not go behind a cloud, and they definitely might not both do it at the same time, and there is a lot of glare shining off the rocks and the water that would blow it out…above all, the compositions here are tough...messy...just don't seem to align right for the lens, unless you get dirty. I’ve got the right tools with me, which I paid good money for and don’t use often enough, despite always being in my bag. Situations like this in the past have sometimes demanded unplanned patient hours on location to get it right. This is often the moment when I don’t try.

What was different this time? A recent hard look at my relationship to discipline. Being a freebird of sorts, I grapple with the idea that somehow being disciplined about stuff leads to freedom and joy. It starts as an internal accepting and curious conversation with the lazy uninspired self-doubting parts of myself…sometimes that works, lately more as my livelihood depends upon it, but sometimes not. What helped in this case is I had a shooting partner this day, so I did what I knew would work. I started explaining out loud the shot I want and reveal the vulnerable part of me that holds me back from trying to get it…like shining a light on my shadows in front of others…often resulting in it shrinking away. This is the point when my self-integrity can’t let go, because I gave voice to it…threw my hat over the wall in other words…and I find the discipline to reach into my bag and start putting all my filters together, while working in uncomfortable perspectives.

The result was joy…a bit of freedom in a way. I shot the first test exposure and giggled. I made adjustments and shot again…this time a maniacal chuckle. I just now needed the breeze to stop and the sun to go behind a cloud. To my dismay 3 minutes later, my shooting partner and the rest of the national forest could hear my maniacal roiling laughter booming over and over. I was out of my self-doubt spin-cycle. As I climbed down below to repeat the work in other perspectives…the laughter continued. What won the day for me this day is recognizing the freedom and joy possible of focusing hard work with discipline without guarantee. Freedom through discipline? Yes.

30mm at f/16, 30 sec, ISO 400, +.3 exposure bias, custom white balance 4600 Kelvin. Polarized filter to cut the glare on water, rocks, and leaves. Lee’s Little Stopper neutral density filter to slow down the scene enough in the mid-day to allow for a 30 second exposure…Getting the wind to not move a single leave on the trees while sun went behind cloud…that? Well that just requires a bagful of patience.
All Rights Reserved
Powered by ZENFOLIO User Agreement
Cancel
Continue