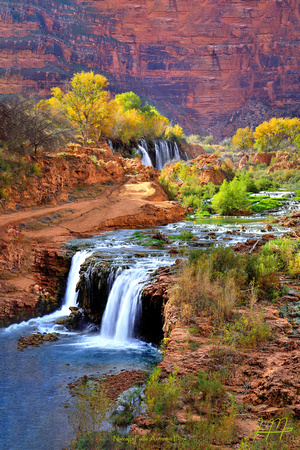 In the Havasupai Nation of the Grand Canyon, between the village of Supai and the Havasupai campgrounds, you start to get some of the first good looks at Havasu Creek. One such view not as well photographed as the more grand Havasu Falls and Mooney Falls further downstream, is Navajo Falls.

Upper and Lower Navajo Falls came into being in 2008 when the flood of that year moved massive amounts of rock and mud gouging out a deep bed. The old Navajo Falls was bypassed in the process leaving it dry.

New Navajo Falls has one of the same characteristics of its old namesake; the creek erupts out of dense vegetation in many different streams to fall about 50' into the pool. This is how the old Navajo Falls behaved at times shifting a lot of its flow through the trees and shrubs to tumble down the rocks in various places across the face of the cliff. The Lower Navajo Falls, also known as Rock Falls, is about 30' high and nearly 100' wide and has a nice swimming hole.
© 2022 John Morey Photography
Powered by ZENFOLIO User Agreement
Cancel
Continue