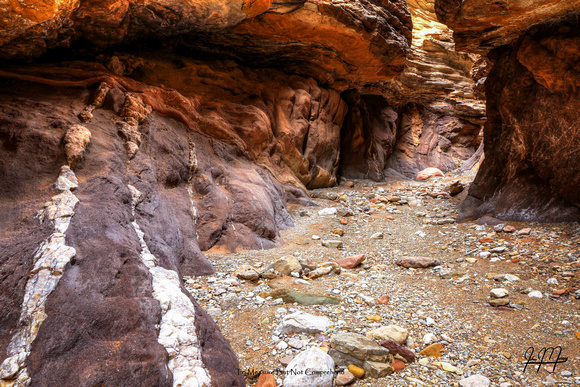 THE GREAT UNCONFORMITY - To Measure But Not Comprehend

We are viewing the "Great Unconformity" within Blacktail Canyon, a beautiful side canyon of the Colorado River, found in the Grand Canyon. Geology is totally preoccupied with time. Time’s passage is recorded by the presence of rock units, but not every geological event is preserved in stone. The absence of a record is of equal importance. Missing time results from rock units that have either eroded away or from periods of time in which no sediment was deposited. Such a gap in the temporal record is called an “unconformity”, and it's the geologist's business to decipher what happened during it. The immensity of this particular time gap has been recognized and singled out as the “GREAT UNCONFORMITY” written with capital letters. John Wesley Powell, the intrepid explorer, scientist and geologist of the American Southwest, first recognized the time gap in 1869.

Near the bottom of the Grand Canyon, a sandstone formation from the Cambrian age, called the Tapeats, rests upon metamorphosed schist from the Precambrian called the Vishnu. Mysteriously, the rock layers that once existed between the two layers is missing. You can run your fingers from the Vishnu Schist to the Tapeats Sandstone and literally touch the gap of lost time within the Great Unconformity. Where did over a billion years of time go? How can we attempt to comprehend its magnitude? Where did all the missing rock layers go? How were they removed? Were they ever there to begin with? What event or events caused this massive time-gap to form? Why did it happen at the end of the Precambrian? What happened during it? How do we know? Are the events global in their extent? Will it happen again? There are many questions. Regardless of the cause, the space of that paper-thin contact represents an enormous amount of time unaccounted for, far greater than all the other known unconformities of the Earth, on the order of being between 1.2 - 1.6 billion years. That’s more than a quarter of the age of the Earth -- Missing!

Blacktail canyon is a popular locale for literally touching the "Great Unconformity" in the serene setting of a beautiful side canyon. The regional westward dip in the strata has caused the Tapeats Sandstone to descend back down to river level making the details of the "Great Unconformity" well exposed to view along the river-polished walls of the canyon. In this image, the wide and flat layers at the top of the image represent the Tapeats sandstone layer, which seems awkwardly layered on top in comparison to the metamorphosed Vishnu Shist below it. In the Vishnu Shist layer on the right side of the image leading up to the Tapeats layer, you can see lines of clast inclusions in the shist of white Zoroaster pegmatite. Clasts are older than the rock in which they are contained, and when seen like this often give hints to recognize a nonconformity such as this.

In closing, the author of the book "Rough-Hewn Land: A Geologic Journey from California to the Rocky Mountains", Keith Meldahl puts something like this in complete perspective, one that probably requires a perspective we haven't gotten to yet:

“Push up some mountains. Cut them down. Drown the land under the sea. Push up some more mountains. Cut them down. Push up a third set of mountains, and let the river cut through them. “Unconformity” is the geologic term for an old, eroded land surface buried under younger rock layers. Put your outspread hand over the Carlin Canyon, Nevada unconformity and your fingers span roughly forty million years- the time that it took to bevel down the first set of mountains and deposit the younger layers on top. What is forty million years? Enough time for a small predatory dinosaur to evolve into a bird. Enough time for a four-legged, deer-like mammal to evolve into a whale. And far more than enough time to turn an ape-like creature in eastern Africa into a big-brained biped who can marvel at such things. The Grand Canyon’s Great Unconformity divides 1.7 billion-year-old rock from 550 million-year-old rock, a gap of more than one billion years. One billion years. I earn my salary studying the Earth and teaching its history, but I admit utter helplessness in comprehending such a span. A billion pages like those of this book would stack up more than forty miles. I had lived one bullion seconds a few days before my thirty-second birthday. A tape measure one billion inches long would stretch two-thirds of the way around the Earth. Such analogies hint at what deep time means- but they don’t get us there. “The human mind may not have evolved enough to be able to comprehend deep time," John McPhee once observed, “it may only be able to measure it.”
© 2022 John Morey Photography
Powered by ZENFOLIO User Agreement
Cancel
Continue