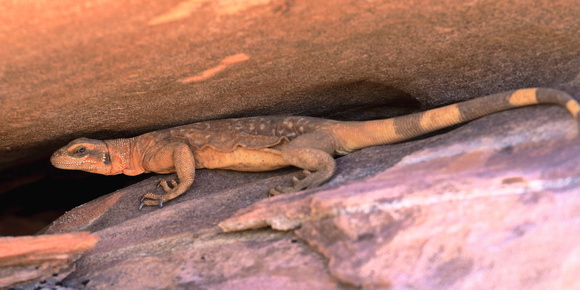 While exploring the epic scenes of the Grand Canyon and Colorado River views from Tuweep (Torroweep), on the western end of the North Rim, it is easy to not see the small things, the hidden things. While exploring in the mid day shadowed contrast of the landscape for possible scenes to shoot later, my eye caught this female Chuckwalla casually watching me from the safety of her crevice. The mid-day reflective glow from nearby sun-lit boulders produced a nice lighting to really demonstrate her subtle beauty. Chuckwallas make their homes in some of the most unlikely tight spaces. The lizard has the ability to lay quite flat, as pictured here, but if an animal or person were to attempt reach in and pull it out, it would inflate with air to the point that it would be wedged into the crevice with its scales providing the grip and friction against the rocks to make it nearly impossible to extract it. If you were

Chuckwallas are large lizards found primarily in arid regions of the southwestern United States and northern Mexico. Some are found on coastal islands. Chuckwallas are stocky, wide-bodied lizards with flattened midsections and prominent bellies. Their tails are thick, tapering to a blunt tip.[5] Loose folds of skin characterize the neck and sides of their bodies, which are covered in small, coarsely granular scales. The common chuckwalla (Sauromalus ater) measures 15 3/4 inches long.
The six species of chuckwallas are all placed within the genus Sauromalus; they are part of the iguanid family, Iguanidae. Sauromalus is said to be a combination of two ancient Greek words: sauros meaning "lizard" and omalus meaning "flat". The common name "chuckwalla" derives from the Shoshone word tcaxxwal or Cahuilla čaxwal, transcribed by Spaniards as chacahuala.

The genus Sauromalus has a wide distribution in biomes of the Sonoran and Mojave Deserts. The common chuckwalla (S. ater) is the species with the greatest range, found from southern California east to southern Nevada and Utah and western Arizona, and south to Baja California and northwestern Mexico.
© 2020 John Morey Photography
Powered by ZENFOLIO User Agreement
Cancel
Continue