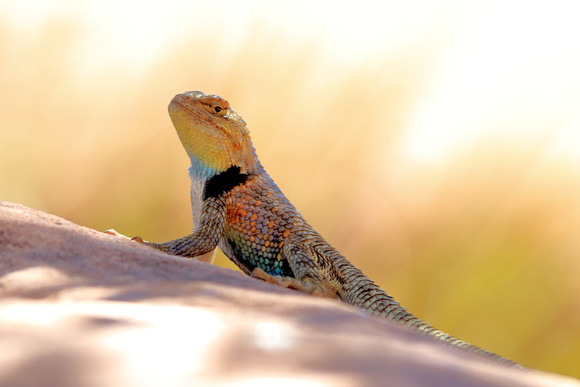 It was hot already, 95 degrees, and it was only 10am up here at Tuweep (Torroweep) at the western end of the north rim of the Grand Canyon. I layed in the shade, setting in for the day conserving my energy wondering what to do...Then along came this Spiny. What caught my attention was the loud noise of something land on the ground. I glanced over to see this brilliant beautiful male making the rounds within this particular patch of ground surrounded on 3 sides by 5 foot high boulders. He scurried over and ate something, then somewhere else eating more, then up back on the rocks to perch for his next meal. This pattern repeated quite often, because while I was settling in to conserve my energy, this guy was fully charged with sunlight warm energy to be quite active. I've seen spiny lizards like this before quite often around the southwest, but it seems the only time I ever photograph them is up at the grand canyon...I'm convinced it is because they stand out so much more brilliantly than others I see. This particular subspecies of Sceloporus magister, the S. m. cephaloflavus have these wonderful yellowish-orange color with bight orange scales scattered down the sides, while also displaying striking black marks on the shoulders as if drawing your attention to the turquoise throat patch that connects them.

A large (up to about 142 mm or 5.6" from snout to vent), stocky lizard with large, pointed, keeled, overlapping scales. Base coloration is gray, tan, or brown. In the southern subspecies (S. m. magister) males often have a large longitudinal purple patch or bar on the mid-dorsum. In north-central Arzona and in the subspecies which lives on the northeastern plateaus (S. m. cephaloflavus) adults often have a yellow or orange head. Yellow or orange scales are scattered on the sides of the body. A black wedge shape marks each shoulder. Males have two large, bright, blue-green patches on the belly and a blue-green patch on the throat. Belly and throat patches are faint or absent in females. The Desert Spiny Lizard ranges across the deserts of southwestern Arizona and the northeastern plateaus at elevations ranging from near sea level along the Colorado River to about about 5,000'.
© 2021 John Morey Photography
Powered by ZENFOLIO User Agreement
Cancel
Continue