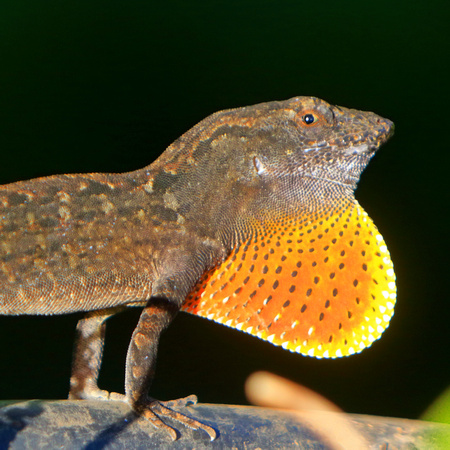 This is one of the many resident Caribbean Brown Anole that lived in my backyard in Maui. This one was working my garden and displaying his dewlap from the top of the garden fence where he could view other intruders and let them know this was his territory. In this particular case he was letting me know.

The brown anole (Anolis sagrei), also known commonly as the Bahaman anole or De la Sagra's anole, is a species of lizard in the family Dactyloidae. The species is native to Cuba and the Bahamas. It has been widely introduced elsewhere, by being sold as a pet lizard, and is now found in Florida and as far north in the United States as southern Georgia, Texas, Louisiana, Mississippi, Alabama, Hawaii, and Southern California. It has also been introduced to other Caribbean islands and Taiwan in Asia.

This species is highly invasive. In its introduced range, it reaches exceptionally high population densities, is capable of expanding its range very quickly, and both out-competes and consumes many species of native lizards. The brown anole's introduction into the United States in the early 1970s has altered the behavior and negatively affected populations of the native Carolina anole (Anolis carolinensis, also known as the green anole), which have since generally been relegated to the treetops. In fact it interesting in my garden that the brown anoles never got higher on perches than 8 to 9 feet off the ground and the green anoles rarely ever came down lower that 3 or 4 feet from the ground...The 3 or 4 feet that was common between the two species made for some interesting moments as they tried to work out their territories.

The brown anole is normally a light brown color with darker brown to black markings on its back, and several tan to light color lines on its sides. Like other anoles, it can change color, in this case a darker brown to black. Its dewlap ranges from yellow to orange-red. The male brown anole's head is smaller than that of the male Carolina anole. Also, the brown anole's tail has a ridge that travels all the way up to behind the head, a feature that the Carolina anole lacks. Female brown anoles can be distinguished by a light brown stripe that runs over their back, a feature that males lack.

Most—but not all—anole species have dewlaps, made of erectile cartilage (modified from the hyoid) and covered in skin, that extend from their throat areas. The dewlap serves as a signal for attracting partners, territoriality, deterring predators and communicating condition.
When not in use and closed it lies inconspicuously along the throat and chest. The size, shape, color and pattern of the dewlap vary extensively depending on species, and often it differs between the sexes, being smaller (in some absent) and/or less colorful in females. Very locally, such as in my backyard, distinct morphs of brown anoles that differ in dewlap colors (not just differences between sexes) do occur together. In addition to colors that are visible to humans, dewlaps can have ultraviolet reflectance, which is visible to anoles.
© 2020 John Morey Photography
Powered by ZENFOLIO User Agreement
Cancel
Continue