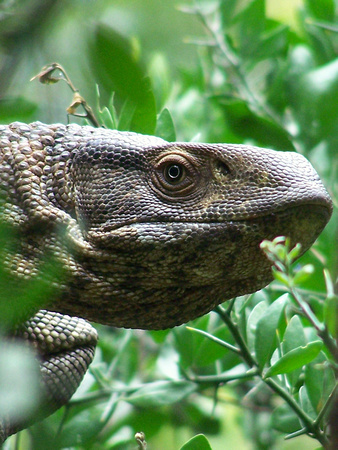 Monitoring From The Trees

The savannah monitor (Varanus exanthematicus) is a medium sized species of monitor lizard native to Africa. The species is known as Bosc's monitor in Europe, since French scientist Louis Bosc first described the species. It belongs to the subgenus Polydaedalus, along with the Nile, the ornate and other monitors.

Savannah Monitor lizards are a stoutly built species with relatively short limbs and toes, and a skull and dentition adapted to feed on hard shelled prey. Maximum size is rarely more than 4.5 feet in length, females are considerably smaller. Its range extends throughout sub-Saharan Africa from Senegal east to Sudan and south almost to the Congo River and Rift Valley. It is primarily a ground-dwelling species that shelters in burrows, although they are sometimes found in bushes or low trees.

As a young man I used to own one, well I adopted it actually from someone not capable of caring for it. For fun I named it 'Fluffy'. While in the wild they guys feed almost exclusively on arthropods, molluscs, millipeads, crickets, scorpions and amphibians. Yet the pet trade seemed quite content to promote feeding crickets and arthropods for the young, the only way to effectively and financially feed them were rats and mice. Fluffy was a really smart lizard it turns out and it knew when daddy came home with a rat, because it recognized the package I was carrying when walking through the room...that kind of package has food in it!!!

This particular one I photographed was discovered while on safari near Ngorogoro Crater, in Tanzania.
© 2021 John Morey Photography
Powered by ZENFOLIO User Agreement
Cancel
Continue