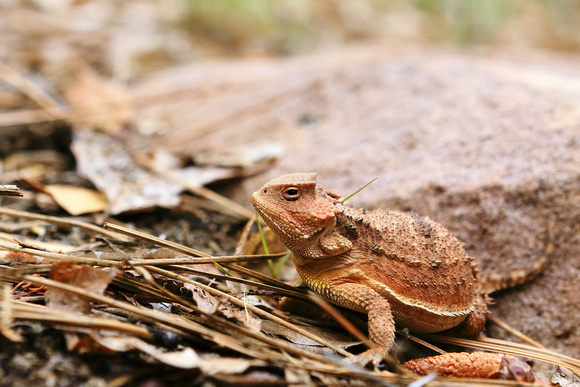 This species of desert horned lizard, known as the greater short-horned lizard, has a distinctive flat body with one row of fringe scales down the sides. They have one row of slightly enlarged scales on each side of the throat. Colors can vary and generally blend in with the color of the surrounding soil, but they usually have a beige, tan, or reddish back with contrasting, wavy blotches of darker color. They have two dark blotches on the neck that are very prominent and are bordered posterior by a light white or grey color. They also have pointed scales on the back of the body. Juveniles are similar to adults, but have shorter and less-pronounced cranial spines. Desert horned lizards prey primarily on invertebrates, such as ants, crickets, grasshoppers, beetles, worms, flies, and some plant material. They can often be found in the vicinity of ant hills, where they sit and wait for ants to pass by. When they find an area of soft sand, they usually shake themselves vigorously, throwing sand over their backs and leaving only their head exposed. This allows them to hide from predators and await their unsuspecting prey.
© 2020 John Morey Photography
Powered by ZENFOLIO User Agreement
Cancel
Continue